In Her Element: Olivia d'Aboville

With a love for Mother Nature and immense talent, artist Olivia d’Aboville is set to make the world just a little better. 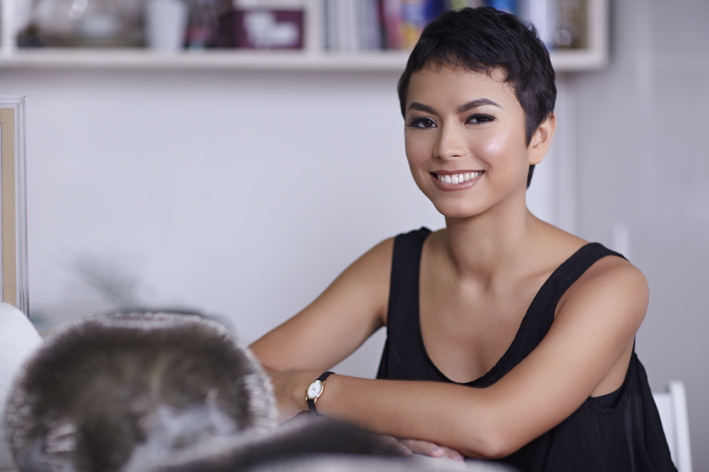 Production is at full capacity when we visit the d’Aboville home. It is mid-January, and on top of preparations for the annual Malasimbo Music and Arts Festival, where she works as the art curator, Olivia d’Aboville is putting together a huge public installation, fashioning plastic bottles into flower-like formations. “In Singapore, these will be lit up and put on top of large stems, so they’ll look like giant dandelions,” she explains. “They’ll also be on display here in Makati, at the walkway connecting Greenbelt to Ayala—but this time they’ll be attached to the ceiling, like stars.”

It goes without saying that Olivia has a knack for taking everyday disposables—water bottles, cocktail stirrers, plastic spoons, etc.—and transforming them into beautiful creations that are sometimes perplexing, often ethereal, always thought provoking. Today she is one of the country’s most talked-about young artists, having mounted exhibitions from as far as Paris and New York to Makati, where her family is currently based.

She embarked on her artist’s journey early. At four years old, Olivia was already wielding a paintbrush on canvases twice her size. All through childhood she painted, taking classes whenever she could, and when she graduated from her high school Eurocampus (today the European International School), Olivia moved to Paris to study art. There, her predisposition to more tactile art led her to discover her love for textile design and weaving, which later led her to sculpture. She was especially impressed by basketry techniques, and from then on started sculpting with textiles. “In my mind, I would always visualise in 3D, so instead of weaving a flat surface, I would create my own woven forms and put them in three dimensions,” Olivia says.

Though Olivia works primarily with plastics now, her biggest influence is Mother Nature—in particular, the ocean and its creatures. “I have a special sensibility to the ocean—the water, the transparency, the movement, the light that passes through it. Everything starts from there,” she says. Just one glance at the 28-year-old artist’s sun-kissed skin is all it takes to see the ocean’s big role in Olivia’s life. Her love affair with the sea began before she was born—back in 1981, when her father Hubert d’Aboville fell in love with Puerto Galera. Later that year, the Frenchman met the woman he was to marry, Olivia’s mum, Araceli Valenzuela. Throughout Olivia’s childhood, her parents would take their brood (Olivia is the second of four) to the beautiful bay in Mindoro, and eventually bought property there to build a home. Thus, Olivia practically grew up next to the sea, which explains why much of her work’s imagery has a lot to do with the ocean and its many creatures.

When she creates, Olivia starts with the material itself, exploring the different ways she can manipulate it. “I don’t really plan ahead,” she says of her process. “I like experimenting.” Though she works with different mediums, Olivia is perhaps most well-known for her work with recycled materials. What initially led her to work with this medium was simple practicality. “I was still studying in Paris, and life there is very expensive, so I would collect and use whatever items I would find, like plastic bottles and bags,” she explains. “In France it’s part of our everyday life to recycle—everybody does it, so I grew accustomed to it there. And when I decided to work on the theme of the ocean and sea creatures, plastic was a key element because of the transparency, the flexibility, and its reaction to lighting.” Using recycled materials also gives another dimension to her art’s overarching message: “Nature’s beauty is so inspiring and beautiful, so we need to preserve and protect it.”

Read the full story in the March issue of Philippine Tatler, available now on newsstands and bookstores. Download the digital version from Zinio or Magzter. | Photography by Mau Mauricio