The Hong Kong Tatler Ball is a glamorous affair that culminates in an awards ceremony highlighting the city’s most stylish and established, and this year was no different. The honours handed out for the 2016 instalment were Most Promising Young Lady, Most Stylish Woman, Leader of Tomorrow, and the Diamond Award — introduced by our masters of ceremonies,  Edipresse Media Asia's Chief Creative Officer Sean Fitzpatrick and TV personality and producer Sean Lee-Davies. Watch the video above to get a first look of the award recipients’ speeches and interviews with Features Editor, Madeleine Ross, and read on to discover their individual accomplishments and accolades. 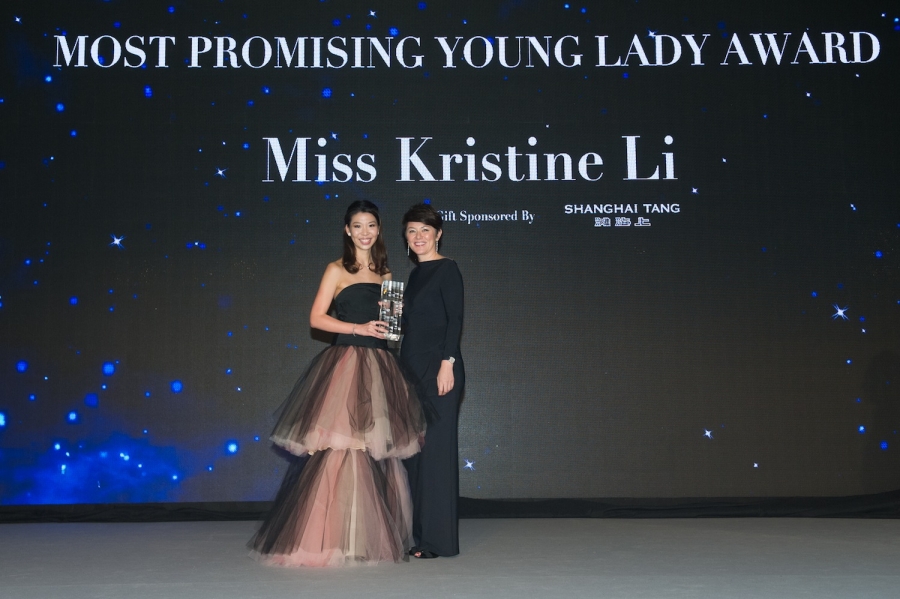 The eldest grandchild of property tycoon Lee Shau-kee, Kristine Li is a stylish star on the rise.  The Stanford graduate — and eldest of three sisters — is turning heads with her sophisticated personal style, blogging about her fashion adventures on Lily Daughters, a joint effort with her equally chic siblings. The award was sponsored by Shanghai Tang and presented by Edipresse Media's CEO Zita Ong.

#OOTDs aside, Li is also lauded for spearheading H Queen’s, a boundary-pushing arts and lifestyle space in the heart of Central. "The project is still not complete — there's still a lot of work to be put in before any promise is actually realised," says Li. "So, this award is a vote of confidence in me. It's very encouraging." Now thriving as the assistant general manager at her family business, Yuen Long’s Kolour Shopping Centre has seen a 40 per cent spike in customer flow under her leadership. 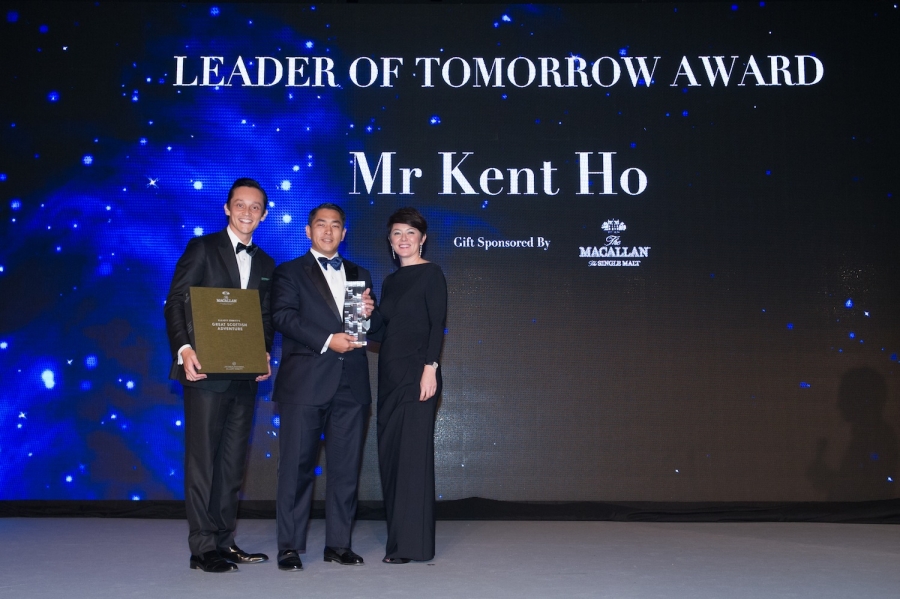 As the co-founder and general partner of Spectrum 28 Capital, one of the largest new early-stage VC funds in Silicon Valley, Kent is actively taking part in shaping the future, with investments in companies within the health care, software and entertainment fields.  "Bridging Silicon Valley with Asia, especially Hong Kong, is a strong cause I contribute to, and it's the responsibility  of everyone in this room to ensure that Hong Kong continues as Asia's World City," says Ho. This honour was presented by Edipresse Media's CEO Zita Ong and sponsored by Macallan.

Apart from his involvement in the tech industry, Kent also serves as a managing partner and co-founder of Harbor Pacific Capital, and is an executive director of Sing Tao News Corporation. The family recently relocated back to Hong Kong after a year of living in New York City, while his wife Emily pursued a second master’s degree at Columbia University. The couple welcomed a baby son last year. The entrepreneur has a special connection with the Grand Hyatt Ballroom, where the Hong Kong Tatler Ball takes place.  "It is in this very room that I met my wife four years ago, it's also the very room I got married in." 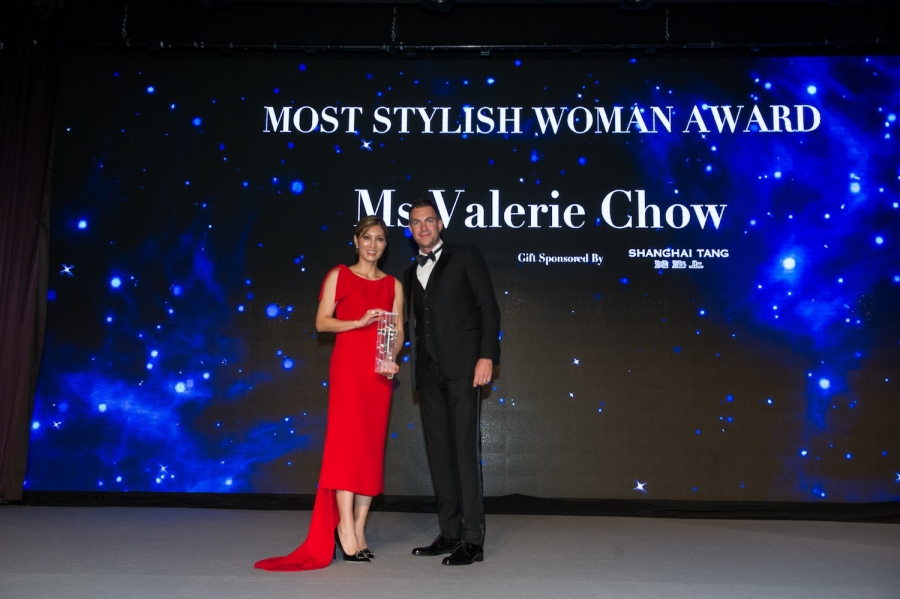 The former actress and model first came to public attention when she became the Miss Hong Kong runner-up in 1991. She now devotes her time to Mama Kid, a fashion-forward children's designer concept store in Stanley. With a background in television hosting, acting and communications, Chow was the first Chinese model to sign with Revlon cosmetics. "I'd like to acknowledge the guidance of Peter Harris at Pedder Group and Lane Crawford," says Chow. "I had an amazing experience with them in my thirties, working with beautiful things, beautiful people, spectacular settings — I wouldn't be considered for an award such as this had it not been for people like Peter and the group."

Chow was presented with the award by Edipresse Media Asia's Executive Chairman, Michel Lamunière, and the gift was sponsored by Shanghai Tang. The style maven was also invited to join Hong Kong Tatler's iconic Asia's Most Stylish shoot in Venice this October. 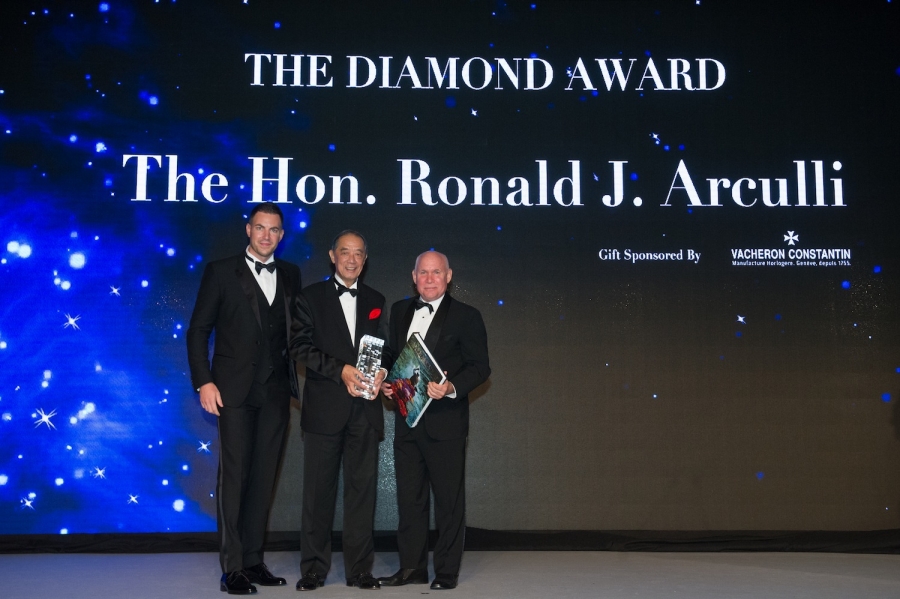 With a storied career and a long list of accomplishments, The Hon. Ronald J. Arculli exerts immeasurable influence over Hong Kong, earning him the prestigious Diamond Award. Currently a senior partner with King & Wood Mallesons, the businessman was a former chairman of Hong Kong Exchanges and Clearing and the Hong Kong Jockey Club. A recipient of the Grand Bauhinia Medal in 2010, Arculli enjoys horse racing, skiing and art.

"Hong Kong is facing perhaps a bit of a challenge right now, nearly 20 years since the reunification with China," the visionary remarks thoughtfully. "But you here in this room have a very critical and important task ahead of you. Hong Kong will always survive...The young ones we see it tonight, this is your future: So make sure you make the best of it." Prior to his uplifting and inspiring speech, Arculli was presented with the award and prize — a photo book signed by legendary photographer Steve McCurry and a trip to Switzerland, sponsored by Vacheron Constantin — by McCurry himself and Edipresse Media Asia's Executive Chairman, Michel Lamunière.