Carlo Calma: On Architecture and Other Passions

Architect, interior designer, and visual artist Carlo Calma gives a peek into his life by sharing some thoughts on architecture and his other passions. Juan Carlo Calma finished multi-disciplinary courses in sculpture, painting, and light design at the California College of the Arts in San Francisco and later moved to the Architectural Association School of Architecture in London to finish a degree in Architecture. Dubbed as "one of Philipinnes' bright young stars" in his chosen field, Calma seeks to bend the boundaries between art and architecture. He is known for designing restaurants like Vask and Mesa, as well as his art installations seen in Solaire Resort and Casino and Nuvali in the Philippines as well as in AA Exhibit in London.

(Vask opened its doors in 2013; read what Calma had to say back then.)

"I was always surrounded with art and design all my life, but I also had a passion for drawing and making models when I was younger," Calma said. "Initially I wanted to focus on just interior design but my dad pushed me to be an architect instead so I could do both. It was the best decision I made. Architecture is not really just about edifices and built projects. There is that rigorous training that lets you see the view in a different light. You see the potentials of a city, an empty lot, a random space, a specific room." Living room of the Calmas' residence

PHILIPPINE TATLER: What is your design philosophy and what inspires you?

CARLO CALMA: As an architect, you have two responsibilities: to be honest with your true gesture and authentic sensibilities as a designer (meaning your architectonics, logic, context, and spatial effects are realised) and to be sensible and sympathies to the needs of the client or the user. I get inspired by random things—everyday objects and situations, travelling, history, conversations with random people—the spontaneous.

(Discover the philosophy of architect Daniel Liebskind in this feature on his Philippine project, Century Spire.)

PT: Do you have favourite visual art pieces?

CC: What I really do in my architectural and interior works is to create bespoke pieces that are specific to the clients. Those are my favourite ones because they are one-of-a-kind pieces. 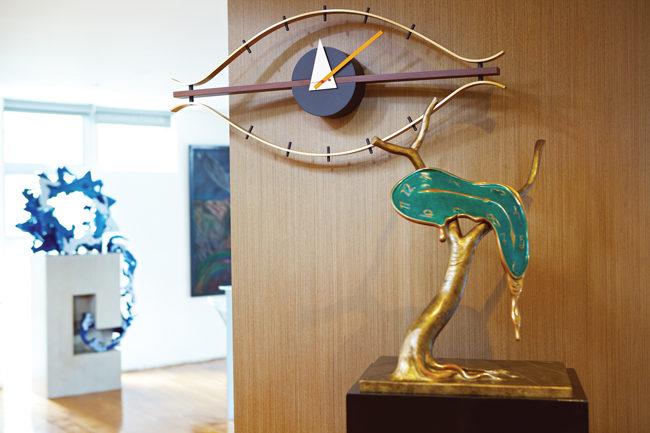 PT: What are your top three favourite structures locally or abroad?

CC: To be honest, this is not my favourite question to answer. I’m very critical in general. I appreciate all kinds of architecture, but let’s just say I believe in three principles—locality, culture, and technology. Locality means being sensitive to existing structures in a particular place. An example could be Renzo Piano’s Tjibaou Cultural Centre. Second is culture. I will be a bit abstract when explaining this category because somehow most of the architects tackle the agenda of culture in different intensities but I will give a good example: the Shigeru Ban Pompidou-Metz Art Museum, inspired by Chinese woven hats and bridges. Finally, when I say technology, let’s say this is the parametric way of designing. This is the era of the architect Zaha [Hadid], of 3D printed houses just like what’s happening in Amsterdam. For me, know your voice—be authentic with what you really want to produce as an architect or designer.

Read more about the one of a kind Carlo Calma in the March 2015 issue of Philippine Tatler. Available in any leading newsstands and bookstores, downloadable via Magzter and Zinio. | Photography by Mau Mauricio