Behind The Scenes with Candy Chuang

What you see is what you get when it comes to Candy Chuang, but she was willing to channel Lauren Bacall for our shoot 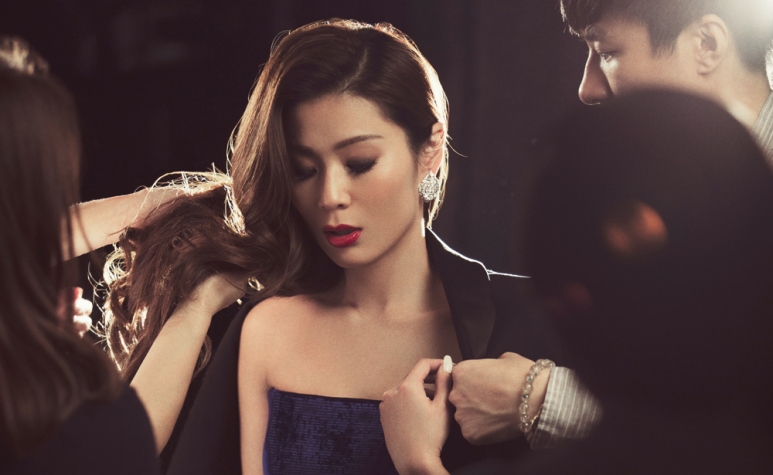 "My gosh, this feels like Jurassic Park,” says a sequin-clad Candy Chuang, posing with a martini in the underground speakeasy where we are conducting her cover shoot. Next door, developers are drilling the foundations for a new apartment block and the ensuing thuds, which come with monotonous regularity, are making the surface of her cocktail ripple.

But nothing is going to stop this no-nonsense live wire from getting the job done. Candy is throwing herself into the theme of old Hollywood glamour under the direction of photographer Olivier Yoan. It’s all about sparkle, smoke, spotlights and sass, which Candy brings in spades. Whether draping herself across plush velvet sofas or balancing on six-inch Jimmy Choos at the bar, Candy looks the consummate femme fatale.

Ironically, she’s more the girl next door than film noir vamp and spends the day chatting to our crew and keeping her staff happy and well fed. Of the shoot’s six outfits, her favourite is a sheer black Marc Jacobs gown with shimmering white lilies. “It’s almost like they’re floating,” she says of the flowers. “It’s dreamy.”

Chloé Zhao, Director of "Nomadland", Spills Her Secrets To Success

Behind The Scenes: Things Got A Little Wild At Josie Ho's Cover Shoot