Why Tailoring Is Having a Major Moment Among Millennials 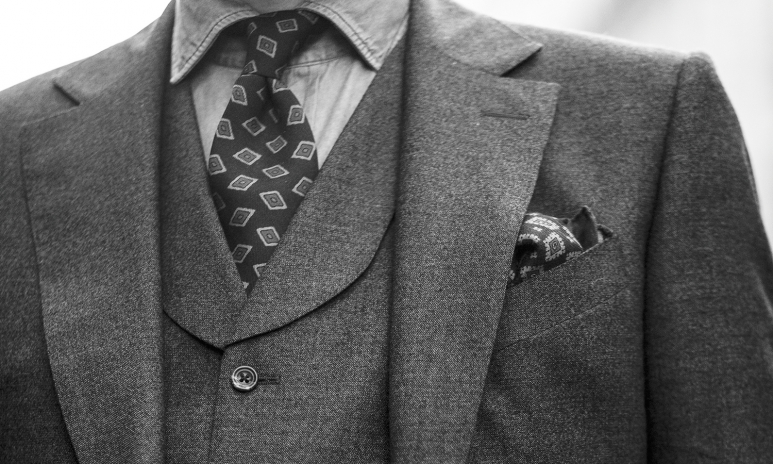 A three-piece suit, a herringbone overcoat,  bespoke Italian shoes and a pocket square—they’re not things you’d immediately associate with the wardrobe of a hip twenty- or thirty-something. Yet given the looks being sported by men on the catwalks, red carpets and pavements around the world, it’s clearly time for a rethink. When it comes to fashion for today’s modern gentleman, traditional tailoring and all-round snappy dressing is having a massive moment.

It’s a sea change that has been happening for a while. “For 15 odd years, we’ve had a resurgence in tailored men’s clothes,” explains Patrick Grant, the extremely well-turned-out director of Savile Row tailor Norton & Sons and ready-to-wear fashion label E Tautz, and a general poster boy for this generation. “We’ve seen young guys wearing three-piece and double-breasted suits, and a huge resurgence in things like bow ties and pocket handkerchiefs. Natty dressing has come back in a big way. Ultimately, we need to feel good in our clothes; that’s why we spend a lot of money on them. And tailored clothes always make people look as good as they can. Girls can go out with a guy for forever and a day, and then suddenly see them in a suit and say, ‘Oh my God!’ Suits are just very chic and elegant—they’re transformative.”

The surge in popularity of heritage brands such as Burberry and Alfred Dunhill, the investment in and reinvigoration of Savile Row stalwarts such as Gieves & Hawkes and Kilgour, and the emergence of newer labels steeped in this aesthetic such as E Tautz and Thom Sweeney, all speak to this new way of dressing—one that’s as smart and sophisticated as it is where it’s at. Gone are the days when it was cool to turn up to your latest movie premiere in jeans; now it’s all about the cut of your suit and the styling of your pocket square. 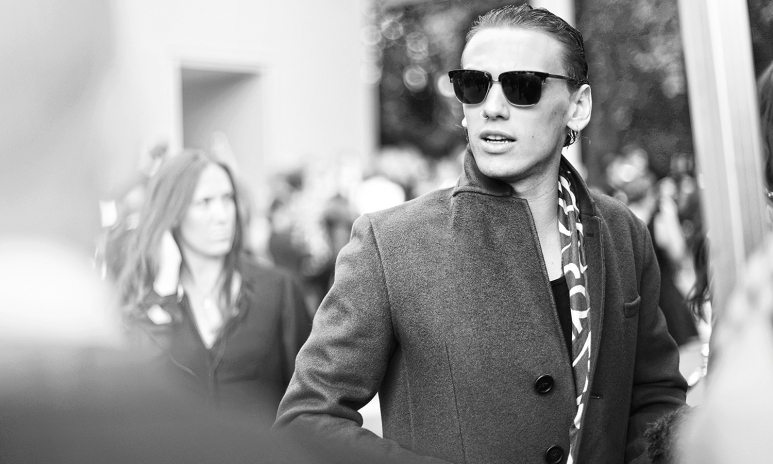 Just look at the actor Jamie Campbell Bower, razor-sharp in his red-carpet Alexander McQueen, and you begin to get the gist. “I suppose we have a lot of streetwear options now and there’s something special about getting dressed up,” he explains of his fondness for a stylish suit. “The silhouette that a classic-cut suit gives is timeless and instantly makes me feel good. Burberry and McQueen are always at the top of the list when it comes to wearing something for premieres or a black-tie party, but I love Ozwald Boateng and Thom Sweeney as well. As for accessories and shoes, I tend to add a lot. I have some amazing shoes from Giuseppe Zanotti with zips all over them that I wear to keep it punk, and I tend to go for Dominic Jones jewellery to keep with the Brit theme.” As ably demonstrated by the 27-year-old Twilight star, what the younger generation is doing is taking the best bits of bespoke and restyling them for their own purposes. This is classic menswear, mark two.

“Savile Row speaks to young and old, to both traditional and fashion customers,” explains Richard Gray, executive fashion director of The Sunday Times. “But now, some tailors like Gieves & Hawkes and Kilgour have a younger affluent set of followers who want to push the idea of a suit a little further. Maybe it’s more nipped; perhaps it’s in a new and clever fabric. It’s still immaculately cut, but it’s more ‘fashion.’” 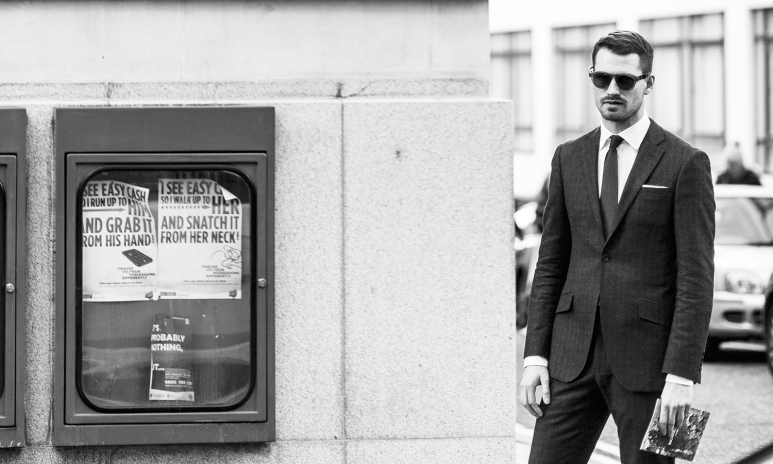 Savile Row continues to resonate with men around the world; Photo: AFP Photo

It’s a point supported by Richard Cohen, the CEO of Trinity—the arm of supply chain behemoth Li & Fung that acquired Gieves & Hawkes, Kent & Curwen and Cerruti 1881 precisely to capitalise on this movement. “Menswear has got itself on the map as a driver of fashion more than ever before. Everyone is looking at it completely differently. Five years ago, you wouldn’t see people on the red carpet at the Grammys in a suit, but now young men are all dressed up. They might be wearing their suit with sneakers, but they’re smart.” Take Gieves & Hawkes’ latest spring/summer ad campaign featuring up-and-coming musicians Sam Fender and Nick Brewer, and it’s clear that the brand is putting its money where its mouth is. When it comes to classic suiting, the people being targeted are no longer middle-aged bankers but their sons.

It’s not only heritage brands that are targeting this shift. New labels are also cropping up specifically to cater to this style-savvy audience, one being London’s Thom Sweeney, a fresh face on the Savile Row scene. “I would say most of our clients come to us for the same reason,” says co-founder Luke Sweeney. “They all want a slightly more modern take on British tailoring. Because of our age, we’re a little more in tune with what’s relevant, but we are still classically trained. The mix of the two creates beautifully made clothes that guys feel grown-up but modern in.”

At Mr Porter, these sorts of brands speak perfectly to a customer striving for this middle ground. “Younger generations instill a twist of modern style when it comes to building a traditional look, with slim-cut versions of classic staples and a more relaxed approach to their style, adding a pair of sneakers or a T-shirt to tailored pieces,” explains Mr Porter’s style director, Olie Arnold. “Kingsman, younger Savile Row brands like Thom Sweeney and Hardy Amies, and even contemporary brands like Thom Browne, all offer luxurious tailoring delivered with a slick fusion of construction expertise and individuality, and with a contemporary or even playful feel.” 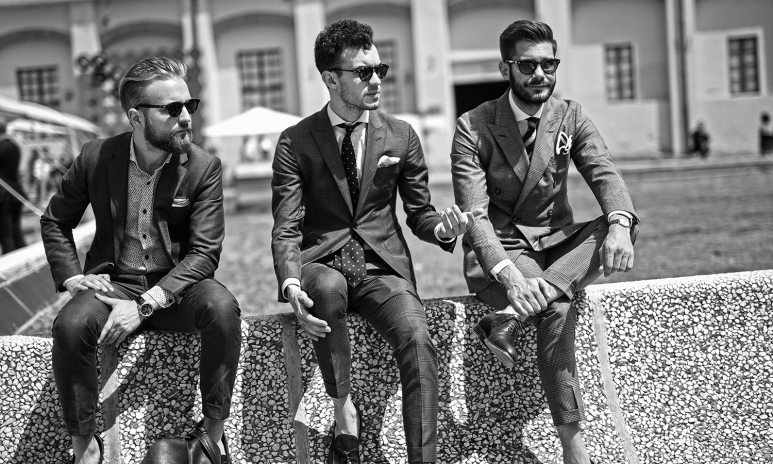 Sharp tailoring, pocket squares and an appetite for the bespoke are defining a golden era of men’s fashion; Photo: AFP Photo

Like all fashion trends, this is happening across the spectrum. Some adopters opt for the purist’s approach, with others pushing the envelope—or rather, the trouser shape—much further. At The Armoury, the much-loved man lair in Hong Kong at Landmark, they like to peddle true classics. “When a man walks into our store, he finds the essentials of his wardrobe,” says co-founder Alan See.

“We want to put him in things that, in 20 years time, will still be wearable.” Accessories range from shoes by Carmina to immaculate ties by Drake’s, and forensically designed shirts that come in everything from cotton to chambray, to pocket squares—the latter an accoutrement See says is emerging with force. “Five years ago, I would only see them on one or two older gentlemen. Now, walking through [Hong Kong’s] Central, the look is visibly catching on.”

For the likes of traditionalists such as the stylish Hong Kong founder and chairman of the Noblesse Group, Brandon Chau, this classic approach works best. “I take a lot of inspiration from the 1930s, from elegant men like Cary Grant and the Duke of Windsor,” he says of his look. “One of my greatest passions is to look for different tailors everywhere, from Savile Row to Milan, Paris and Naples. For me, it’s more about style and elegance than it is about fashion.” 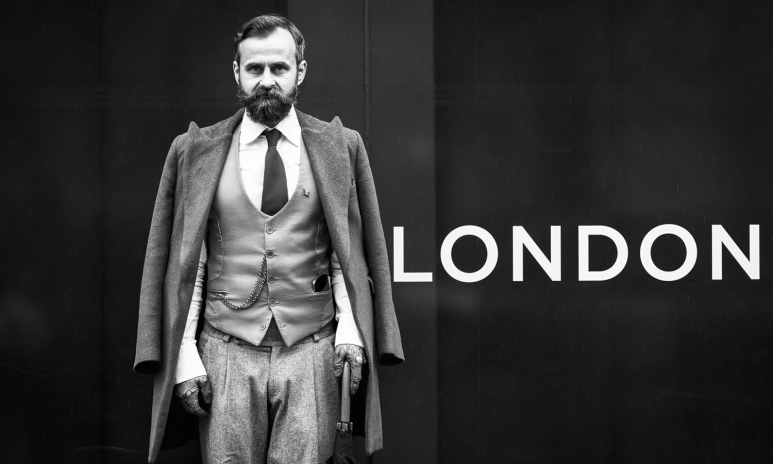 Further afield, however, new territory is being conquered. On the high street, brands are reimagining the classic look for twenty-somethings who hold the likes of Campbell Bower—who is a fan of a more rock-inspired take—as their style icon. “I like a slim leg and tailor my jackets toward the tight side,” he says. “I have always liked a more fitted suit, as I’m quite tall and rakish. I add my own chains and keep my piercings in to show that, even though I’m dolled up, I’m still just a rock kid at heart.” Says The Sunday Times’ Gray, “Look at Topman. Their slick silhouette speaks directly to young-genners who want smart but hyper fashion suits. These kids are creating their own rules of suiting.”

“I like that idea you see in old mobster films, where they’re always dressed super-sharp in silk shirts and pimp suits, looking totally badass” — Justin O'Shea

Peer deeper into a man’s wardrobe and you’ll also see more casual brands getting in on the game. Orlebar Brown, the cult swimwear label known for its traditionally styled shorts, exists as firm evidence of the classic elements working their way into all corners of men’s fashion. “They’re all about that Steve McQueen look of a shawl-collared chunky knit with your swimwear, somewhere on a boat off the coast of Italy,” says See. “And who wouldn’t want to look like that?”

Back at E Tautz, Grant is pushing the silhouette further, featuring a more 1980s-inspired draped fit with fuller trousers and softer shoulders. “I want to wear something that feels more relaxed and comfortable; it feels cooler to me,” he says. “It’s still beautiful tailoring—it’s just a bit Miami Vice.” Over at online retailer MatchesFashion.com, they would agree. “Making it look modern is primarily about proportion,” says the site’s head of menswear, Damien Paul. “In the past few seasons, we’ve seen a general sense of loosening up. Some of the old ‘rules’ also feel less set in stone than they used to. It feels right to wear a tailored trouser with a pair of sneakers, or a blazer over a crew-neck tee. It’s a way of looking smart and appropriate without being old-fashioned.” 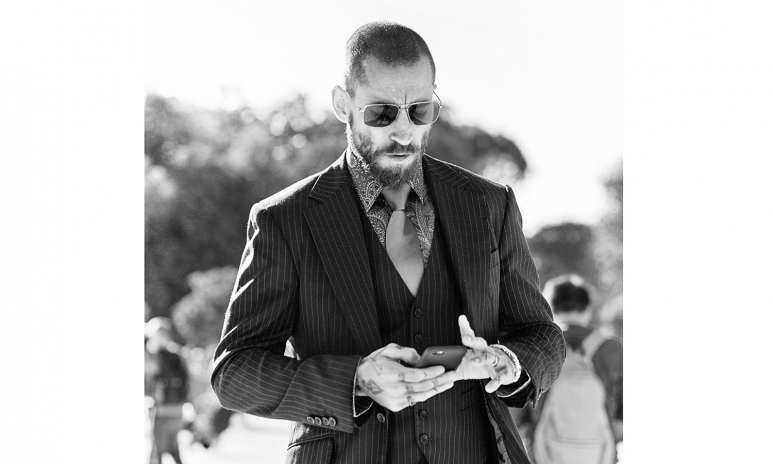 Look at Justin O’Shea, the extremely dapper buying director for fashion website MyTheresa.com, and you’ll see a shining sartorial example of traditional menswear creating a whole new vibe. (Ed note: It has since been announced that O'Shea is leaving his post at the e-tailer to be the new Creative Director of Brioni) The self-styled “Wall Street Gangster” is known not only for his slicked-back hair, beard and tattoos, but also for his love of a three-piece suit. “I always wear one,” he explains. “But at the same time I’m not super-boring. I grew up in the outback in Oz, so I don’t have a history of trying to fit in all the rules of gentlemanly dressing. And actually, what’s so great now is that there are no rules. You can change up your look with a shirt, tie and shoes, or even with tonnes of tattoos. I love vintage Hawaiian shirts—and just look at Alessandro Michele at Gucci with his pussy-bow blouse for men. We’re seeing a lot more adventure in menswear.”

"I think men should have a certain aesthetic. Guys should still stand up when a girl leaves the table, and that whole idea of what a man should be all ties back to what he should wear.” — Justin O'Shea

For O’Shea, however, his own fashion boundaries still tend to remain within the realms of that immaculate three-piece. “I like that idea you see in old mobster films, where they’re always dressed super-sharp in silk shirts and pimp suits, looking totally badass, whether they’re torturing someone or driving around in a Rolls-Royce. And then I also love that idea of 1990s Wall Street that was all about an appreciation of quality and devotion to wanting the best.”

In many ways, what this all adds up to is a golden era for men’s fashion. Working the best of bespoke with all the style savvy of the fashion-conscious makes for a look that’s as on the money as it is flattering and elegant. It also relies on clothing that’s properly made and built to last, as well as items that evoke values steeped in tradition. As O’Shea puts it, “I hate to sound like a super-traditionalist, but I think men should have a certain aesthetic. Guys should still stand up when a girl leaves the table, and that whole idea of what a man should be all ties back to what he should wear.” The message here is clear, boys—if you want to be where it’s at, it’s time to stand up and look sharp.

Suiting Up: How Savile Row Is Adapting To The New Trends In Luxury Retail

This Rare Hermès Bag Could Be Yours This Christmas