Why Gentlemen Should Polish Their Own Shoes

Tailor by trade, Sydney native Ethan Amos Newton is also dapper by definition. He began his tailoring endeavours as a teenager and has never stopped sewing exquisite fabrics together since. After spending 17 years in the profession honing his tailoring skills, Newton arrived in Hong Kong in 2011 to co-found The Armoury, one of our favourite men’s artisanal clothiers, overseeing the retailing front and, well, tailoring of the business.

His naturally picturesque store offers everything from cufflinks to blazers, and shirts to artisanal leather shoes, each in their designated corner. While shoe polishing is not a service offered by Newton – his method takes a few hours from start to finish, so it would be counter productive to charge for it – it is something he couldn’t stop doing in his free time at The Armoury.

Speaking composedly to us as he gently dips a cotton ball into alcohol and shoeshine, it is as if he has all the time in the world to clear his mind and enunciate his words ever so clearly. In Newton’s eyes, shoe polishing is an art and “a bit of a meditation”.

“There’s a definite philosophy behind shoe polishing,” says Newton, whose method is called “mirror polish” or a glacage, where coat after coat of base wax is built up until it comes to a mirror shine. “It is something that’s both very luxurious and frugal, because it’s not for the flashy guys who buy lots of shoes and throw them away when they get old.” Rather, according to Newton, it is for those who wish to install longevity in their shoes from day one. 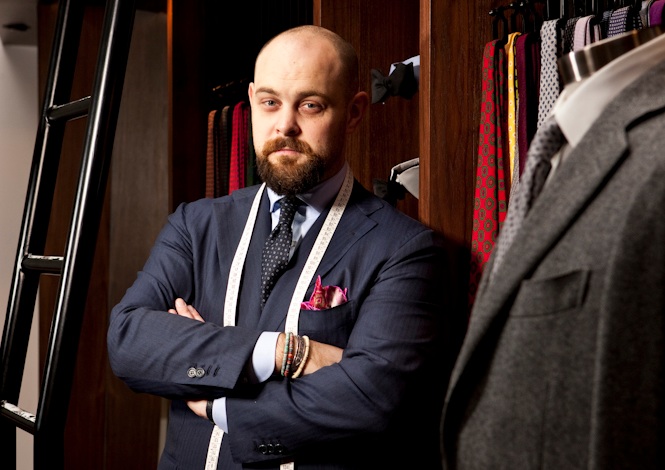 As he buffs, repeatedly in circles, the sole of the shoe that is starting to shine (yes, even the sole), it suddenly dawns on me that shoe polishing has an inexplicable aesthetic component to it that is as mesmerising as it is rewarding, giving you the urge to take better care of whatever you walk in. “Most guys won’t do [shoe polishing] themselves, but it has definite results,” says Newton. “It’s one of those things that you start and you know if you put the time and effort in, and you do it properly, it will turn out beautifully.”

The word beautiful coming from an impeccably dressed man comes with a respectable force. Standing at about six feet tall, Newton’s sky-blue shirt flatters his obvious big frame under a well-worn apron, and his brown Oxford shoes are perfectly shined, partly hidden under the trunks of his wrinkle-free trousers. Even his trimmed brown beard suggests how meticulous he is about his appearance. He is the textbook example of a dapper gent.

Wondering how to maintain your shoes? For starters, don’t apply too much polish and water; also, you must allow sufficient time for the wax to sink in. Newton says he’s happy to teach. Try to get on his good side and he may even invite you to one of the private shoe-polishing (smoking, drinking and away-from-the-wives) sessions at The Armoury.

In the video above, Newton shares with us his philosophy on shoe polishing and some of the best tips for maintaining a pair of good-looking shoes.