How The Burberry Trench Coat Became The Icon Of British Fashion

Born on the battlefield, it's now a weapon of fashion dominance for British house Burberry. The Equestrian Knight trademark appears for the first time in 1901

Before the trench coat became a fashion classic, it was once standard military issue. In its early incarnation, the coat—with shoulder straps to attach epaulettes and insignias, and large pockets to hold maps—was long, heavy and cumbersome. When the coats were caked in mud, they became heavier and even more unwieldy, restricting the movements of soldiers during combat. Even worse, the coats smelled.

What soldiers needed when under threat in extreme conditions was outerwear that was shorter, lightweight, waterproof and breathable. Most importantly, it would have to allow them to move freely and quickly.

Enter Thomas Burberry. In 1856, the apprentice draper established his eponymous menswear brand, specialising in outdoor attire. In 1879, Thomas invented gabardine, an innovative tightly woven fabric that was tough, waterproof and breathable. The invention proved timely. In 1902, Burberry became one of the companies that the British War Office commissioned to design a new coat for its soldiers that would help them weather the harsh conditions in the battlefields.

Burberry adapted its earlier officer’s coat in 1914, adding the epaulettes and “D” rings. The coat was khaki-coloured and water-resistant. Because it had ticked all the boxes in design specifications—shorter, lighter, ventilated, waterproof, allowing ease of movement—and proved its worth in the trenches, the soldiers dubbed it the trench coat.

(Related: How to Wear Your Burberry Scarves)

The battlefield was not the only place where Burberry outerwear made its mark. Burberry notched another notable milestone in the history of firsts when Norwegian explorer Roald Amundsen, the first man to reach the South Pole, was kitted out in Burberry gabardine for that mission. The company garnered even more recognition when British explorer Sir Ernest Shackleton, also outfitted in Burberry gabardine, survived his harrowing Imperial Transâ€‘Antarctic Expedition. 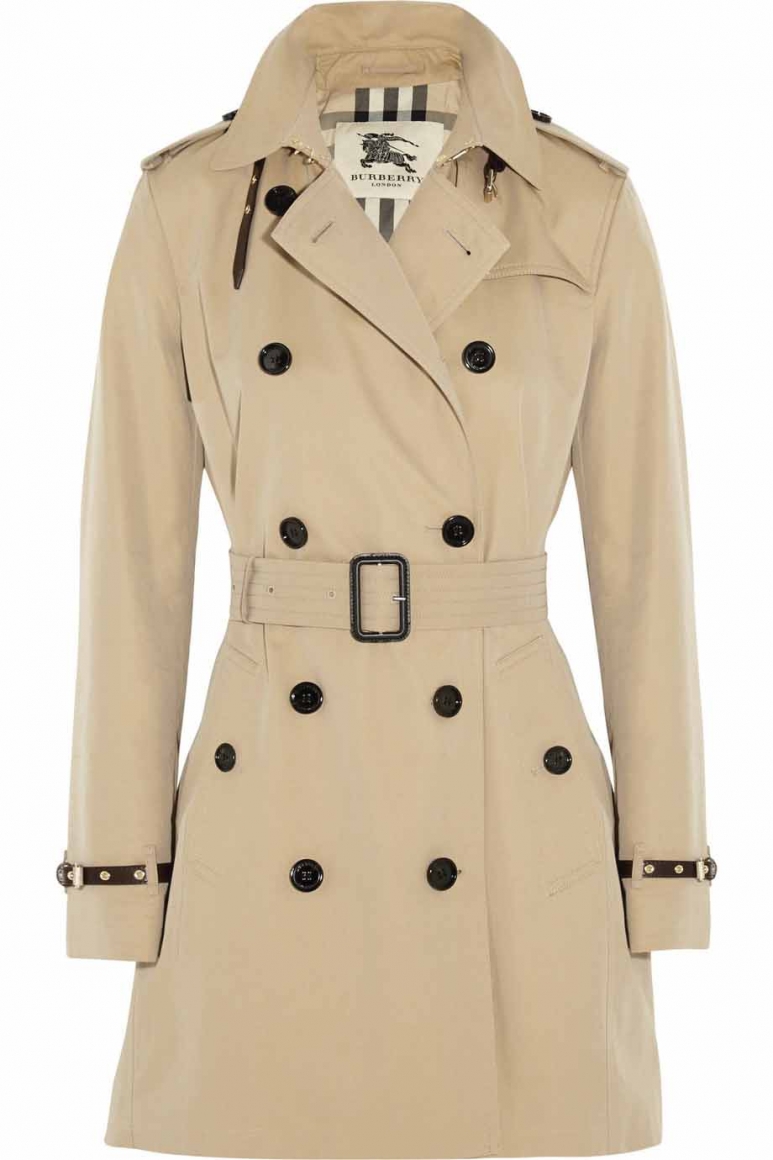 The classic Burberry trench coat, with epaulettes on the shoulders, a self-belt,10 front buttons and buckle-strapped sleeves

The trench coat gradually made its way into the mainstream, with civilians wearing them to show their support for troops in the battlefield. At the same time, there was a glamour attached to the trench coat, especially when advertisements of the time were of attractive officers decked out in uniform; no romantic could resist the image of an officer in such sharp rags. But what nudged the trench coat into the path of fashion stardom was Humphrey Bogart who wore it in the 1942 classic Casablanca. The way he wore the Burberry trench coat and defined it, in a cool, almost louche style, is forever embedded in the public’s stream of consciousness.

Like denim, the trench coat has become part of the fashion lexicon; it has stood the test of time, and its design—almost unchanging in a century and more—remains a staple in every collection.

(Related: Hermes Has A Laundromat Just For Their Silk Scarves)

1879: Thomas invented gabardine, a tightly woven and hardwearing fabric that was breathable and waterproof, and patented it in 1888
1899: During the Boer War, part of the British military officers’ issue were mackintosh-style raincoats in Burberry gabardine

1912: Burberry patented the “Tielocken”, a type of trench coat worn by British officers

1914: The British War Office commissioned Burberry to redesign the rubber coats and the greatcoats. Trench coats became standard issue for the military

(Related: Mr. Burberry Is Ready to Meet You Now)

Wired Earphones Are Back, Thanks to Bella Hadid: Here's Why Gen Z Love It

Why Did Virgil Abloh Sell Off-White to LVMH?