As the New York fashion designer launches his first pop-up store in Hong Kong, we leap at the opportunity for an interview with the designer and a personal tour of the store, transplanted from New York

Fresh off the plane, having arrived early in the morning into Hong Kong from Shanghai as a part of his Asia tour, Alexander Wang, the celebrated fashion designer is dressed in his signature black hoodie and skinny jeans. His hefty tasks of the day include preparatory work for his opening party with Joyce that evening; giving his first incubator store on Canton Road in Tsim Sha Tsui its finishing touches, and juggling back-to-back meet and greets and interviews slots in-between. The poor man looks like he’s ready to crash when we meet him in the afternoon. We were warned by his PR rep: “He’s had a long, tough day, he just wants to rest and spend some time with his mother who’s waiting for him at the hotel”. Bless.

We meet designer Charlotte Dellal of Charlotte Olympia as she debuts her collection in Hong Kong here.

The Alexander Wang that we met that afternoon is a world away from the designer we famously know to throw some of the best New York parties. In fact, it was hard to imagine how this polite, humble and soft-spoken candidate before us could adopt the party animal persona required to host his launch party that very same evening. 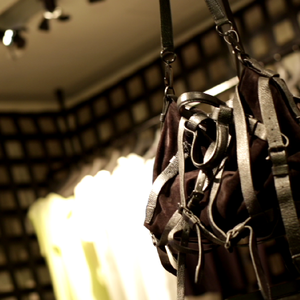 At 28 years-old, the Taiwanese-American designer lived in San Francisco and made his mark in New York as one of the leading figures in the wave of contemporary New York designers who brought the spotlight back to the New York fashion scene four years ago (along with Jason Wu and Richard Chai, to name a few). He has a cult following in the fashion scene and online, at the time this article was written, his eponymous brand had a following of 67,941 followers on Twitter and 280,035 “likes” on Facebook, a jaw-dropping number for a label around for merely five years.

With family in Asia, Wang is no stranger to Hong Kong, in fact he’s paid many off-duty visits to Hong Kong in the past, he even cites Lei Garden as a culinary favourite. In the interview, we also learn of his love for comedies from the ‘80s (especially Overboard with Goldie Hawn in it) and how Mean Girls, Major Lazer’s debut album Guns Don’t Kill People… Lazers Do and Sichuan food, all hold a special place in his heart, collection and stomach. What else did he share? Click the link above to see our video interview with Alexander Wang.