Meet Ralph And Russo, The Cool Kids Of British Couture 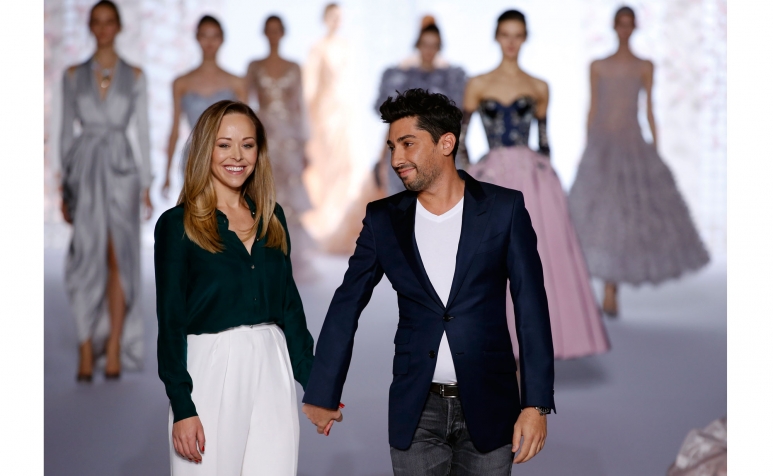 On a trip to London a little more than a decade ago, Tamara Ralph, lost and not looking where she was going, collided with a stranger in Knightsbridge. The young Australian dressmaker, whose clients included a collection of Sydney’s rich and famous, and Michael Russo, a fellow Australian working in London, got talking.

Read more: Get Your Ears Pierced By Beyoncé's Jeweller This April

Today, Ralph, 35, and Russo, 36, are partners in love and soon to be married. They are no longer anonymous new arrivals in London but giants of the world of couture. The brand they founded in 2007 with “just a few hundred pounds” and a single sewing machine, Ralph & Russo, now make bespoke gowns for a 1,000-strong client list of the world’s wealthiest and most influential.

The couple’s reputation grew so rapidly that by 2012 they were dressing Angelina Jolie for the red carpet; in 2013 Beyoncé commissioned them to make the outfits for her Mrs Carter world tour. That year, the couple also made Fortune magazine’s list of the 40 most successful business people under 40. 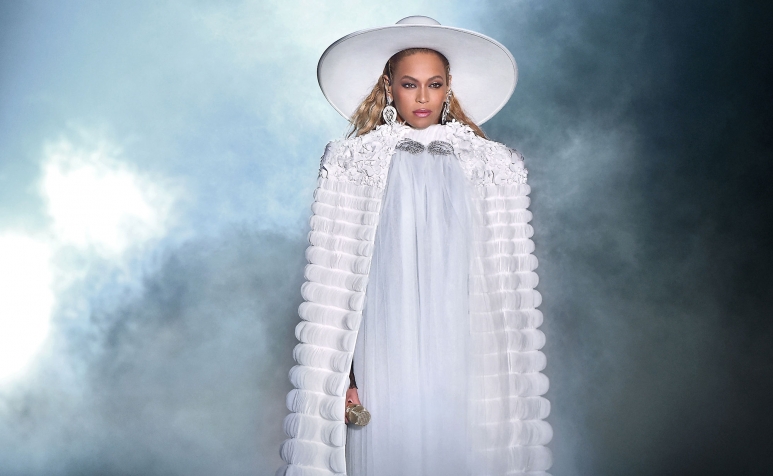 In December 2013, Ralph & Russo was accepted into fashion’s most coveted club, the Chambre Syndicale de la Haute Couture, becoming the first British brand since 1915 to be admitted to the official programme of Paris Haute Couture Week. By 2014, the brand’s value was estimated in the region of nine figures.

So how did these thirtysomething Australian lovebirds manage to establish themselves as a British couture house on par with the major Italian and French luxury brands, and in less than a decade? I meet the couple at their London maison to find out.

She is petite and polished, dressed entirely in her own designs; he is soft-spoken in a perfectly cut grey suit, also by Ralph & Russo. They are the chic and sophisticated embodiment of their brand. Her domain is the atelier, his distribution and retail. Do they discuss work at the dinner table, I wonder.

“It’s the boardroom,” laughs Ralph. “There’s so much going on and it’s what we love, so it’s hard not to talk about it.” 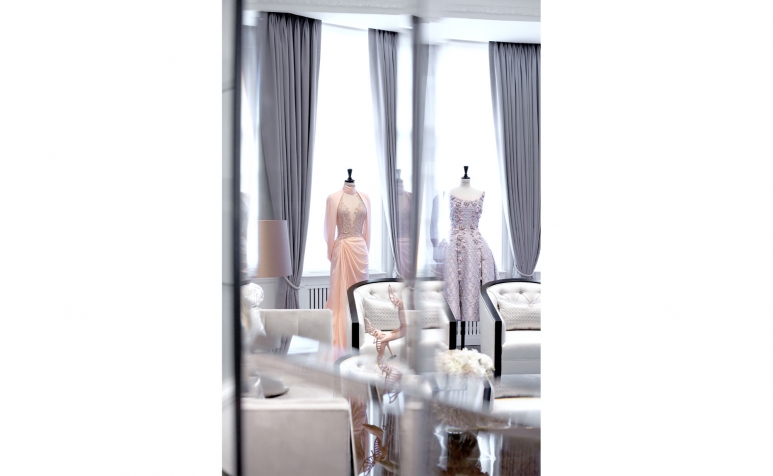 And with that, the talk turns to the genesis of Ralph & Russo. The pair spent a few years—“not months, years,” Russo stresses—researching suppliers and fabrics, and training the right craftspeople, before officially launching Ralph & Russo in 2007. The business grew organically via word of mouth. It had to; in the early days, they relied on the money from one client to buy the fabric for the next.

“It was exciting,” Ralph says. “We knew exactly what we wanted to do and we spent time making sure we had the right foundation to start.”

Today, the painstaking detail at the heart of the brand’s success is on display at their 18,000-square-foot atelier in a non-descript sixties office block a 10-minute drive from Mayfair. Here, 150 white-coated artisans—twice the number employed at Chanel’s atelier in Paris—bead, embroider and sew together Ralph’s fantastical creations. 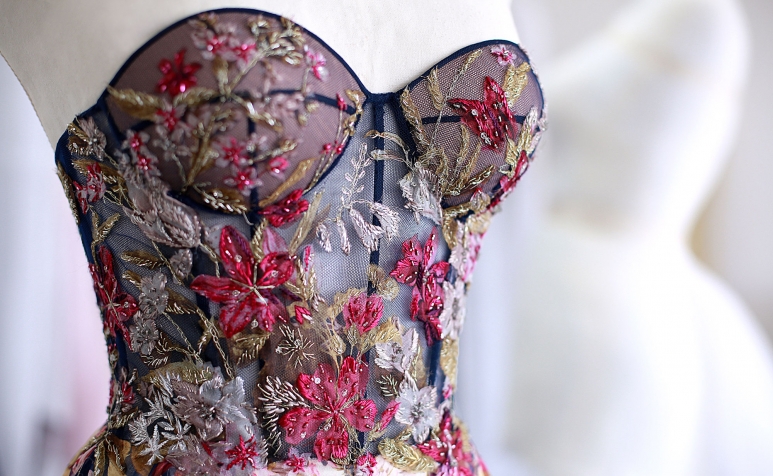 In one corner, two women painstakingly attach hundreds of small flowers made of feathers to 600 metres of pink tulle destined to become a train; in another, a young woman peers through a magnifying glass as she sews minute crystals onto a three-dimensional butterfly—just one of 250 to be attached to the finished gown.

Scattered about the room are dozens of “bodies,” headless dummies packed to a client’s exact shape according to 35 measurements taken during a fitting. “Clients these days don’t have time for six fittings, so these moulds are specced out to the millimetre,” says Ralph.

Hand-written in black marker on the “bodies” are intriguing names: those of European princesses, Middle Eastern royals, celebrities and simply the rich—an insight into the breadth of modern couture customers. 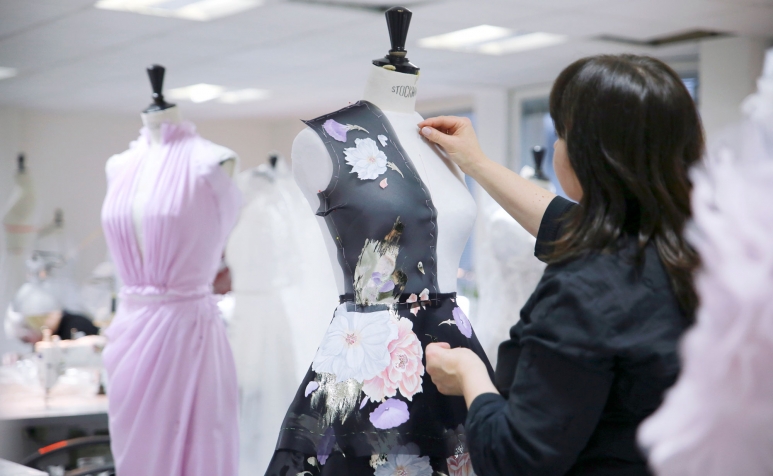 The finished garments start at £50,000 for the simplest of day dresses and jump to £500,000 for evening dresses. While the couple’s celebrity clientele, which includes the likes of Blake Lively, Gwyneth Paltrow, Fan Bingbing and Kim Kardashian, give them plenty of exposure, many of their creations are never seen in public.

“There have been some incredible pieces—robes covered in real gold, diamond-encrusted gowns—that no one will ever see,” says Ralph.

Created for private events, these dresses are often worn only once and then stored in the clients’ own temperature-controlled archives. “They’re investment pieces because they’re works of art,” she explains. “People put them in museums or keep them in archives; some pass them to their daughters.” 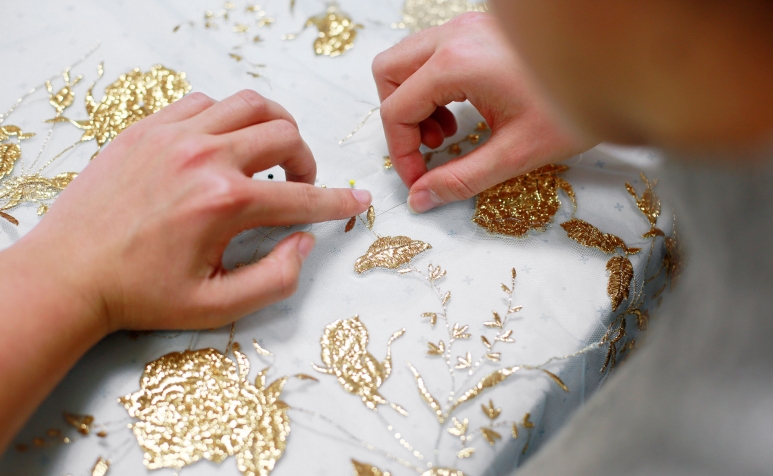 This goes some way to explain why, until their Paris Haute Couture Week debut in January 2014, the brand remained relatively unknown outside elite circles. The couture shows, which take place in January and July, have catapulted Ralph & Russo into the wider fashion world’s consciousness.

“Many of our clients were actually disappointed that we ended up showing,” says Russo. “We were no longer their best-kept secret.” Those wishing to purchase from the runway have to be quick; just one of each style is sold in a country to ensure exclusivity.

Clients tend to reserve dresses during the show: “Our phones go crazy from the moment the first model walks out,” explains Russo, and backstage there is a map of the world; a pin goes in when a particular dress has been sold in that country. 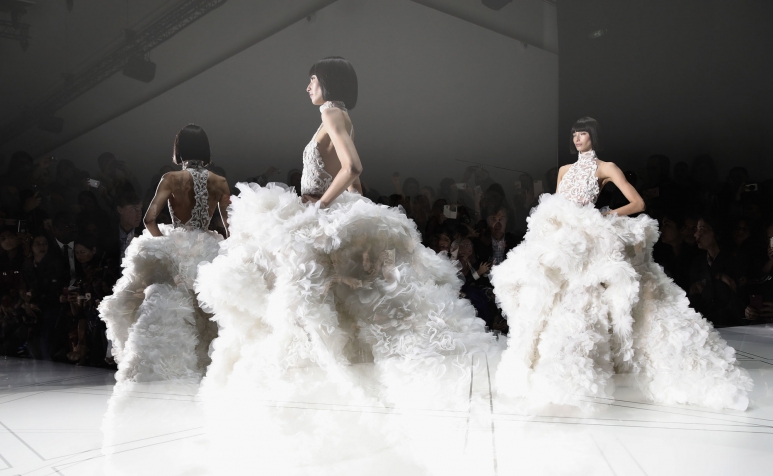 In December 2014 the pair made an unusual move for a couture brand, launching a boutique in the Superbrands section of Harrods. Its customers can buy couture “off the rack” and have it tweaked to fit them in a process that takes three weeks rather than the usual three months.

“Initially some people didn’t understand why you would have a couture retail experience,” says Russo, “but it has helped fulfil a need for some of our clients who want an exclusive piece but need it fast.” 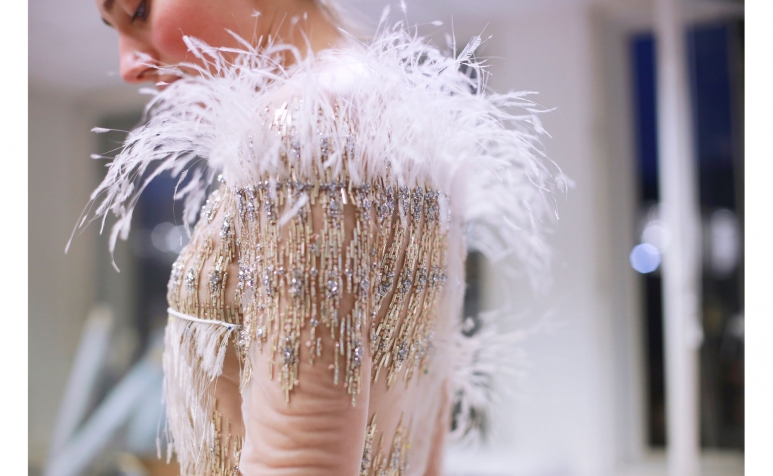 And although couture will always be at the heart of the brand—“it drives the fantasy,” says Ralph—they have also diversified, very successfully, into handbags and shoes, with menswear and ready-to-wear on the horizon.

The couple also plan to open showrooms in New York and Hong Kong this year. “You’re going to see a lot of us in Asia,” says Russo. “We’re really trying to position the brand as a luxury powerhouse. There is no other brand that has started with couture; we have rewritten the rules in that sense.”

It’s a tricky balancing act, to make couture more accessible while maintaining a sense of exclusivity, but Ralph and Russo have managed it, marrying old-world refinement and splendour with new-age business savvy while retaining the personal touch. “Things have changed,” says Russo. “If you stay in the past, you live there as well.”

See the full article in the March 2016 issue of Hong Kong Tatler.

See also: Johanna Ho On The Evolution Of Eco-Fashion