Alessandro Michele: The Next Big Star When you think a fashion brand has reached the height of its iconic status, another designer with a fresh perspective then comes along to prove you wrong. Such was the case with Gucci. The strong brand didn’t seem to need any help selling itself, especially under the equally iconic creative designer Tom Ford who turned its market stability around. But Ford left, and three designers hence, the Italian Alessandro Michele was appointed Gucci’s creative director in January 2015. Debuting in his new role at the fall/winter 2015-16 runway shows, Michele revealed his new direction for the house and made the famous luxury brand hotter than hot. He is not a newbie to Gucci, however, having joined its London-based Design Office way back in 2002. Interestingly, it was Ford himself who invited Michele, then the senior accessories designer of Fendi, to join Gucci.

Michele, who was born in Rome and studied at the prestigious Academy of Costume & Fashion in Rome, held a variety of positions in Gucci: leather goods design director, associate to the creative director Frida Giannini, even the role of creative director of Richard Ginori, the fine Florentine porcelain brand acquired by Gucci in 2013.

His long-standing association with the brand is certainly an asset in this new role, which he took over from Frida Giannini. His innate talent and deep knowledge of both the company and its design teams enable him to quickly and seamlessly implement his new creative direction, one wherein he wanted to embody the change that happened through the years. Michele mentioned in an interview that he wanted to change everything that Gucci has become and he wanted to convey this change through his works, showing that the woman during Ford’s time differs greatly from the woman of the present time. 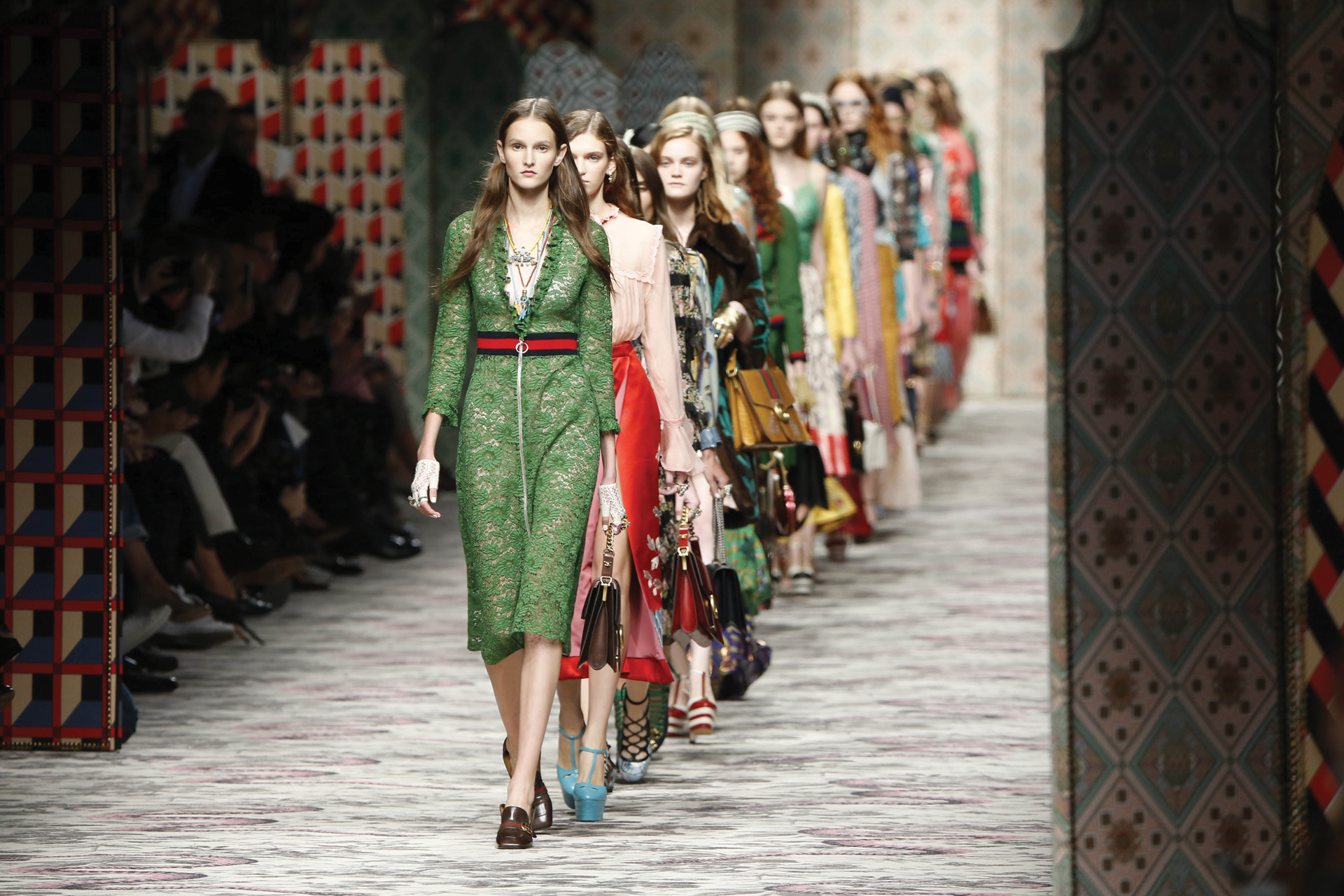 Michele showcased more of his versatility in the newest Gucci spring/summer collection. Staying true to the brand’s affair with the legendary era of the ’70s, he incorporated more floral prints in both collections as he dared to be adventurous, adding print and fabric to fit the style of the modern era.

Greatly inspired by the Italian designer Walter Albini, who created clothes that he himself could wear, Michele did the same. An artistic practice in transforming artworks mainly by creatively disfiguring it is what inspired the spring/summer male’s collection—Détournement. Such as his own perception of what contemporary is, Michele mentioned in an interview, “I did not wantany rules since rules create endings, and I prefer beginnings.” His choice in patterns and techniques in creating such wonderfully aesthetic collections was pushed by this no-rule law, on which not even his imagination is considered a boundary. 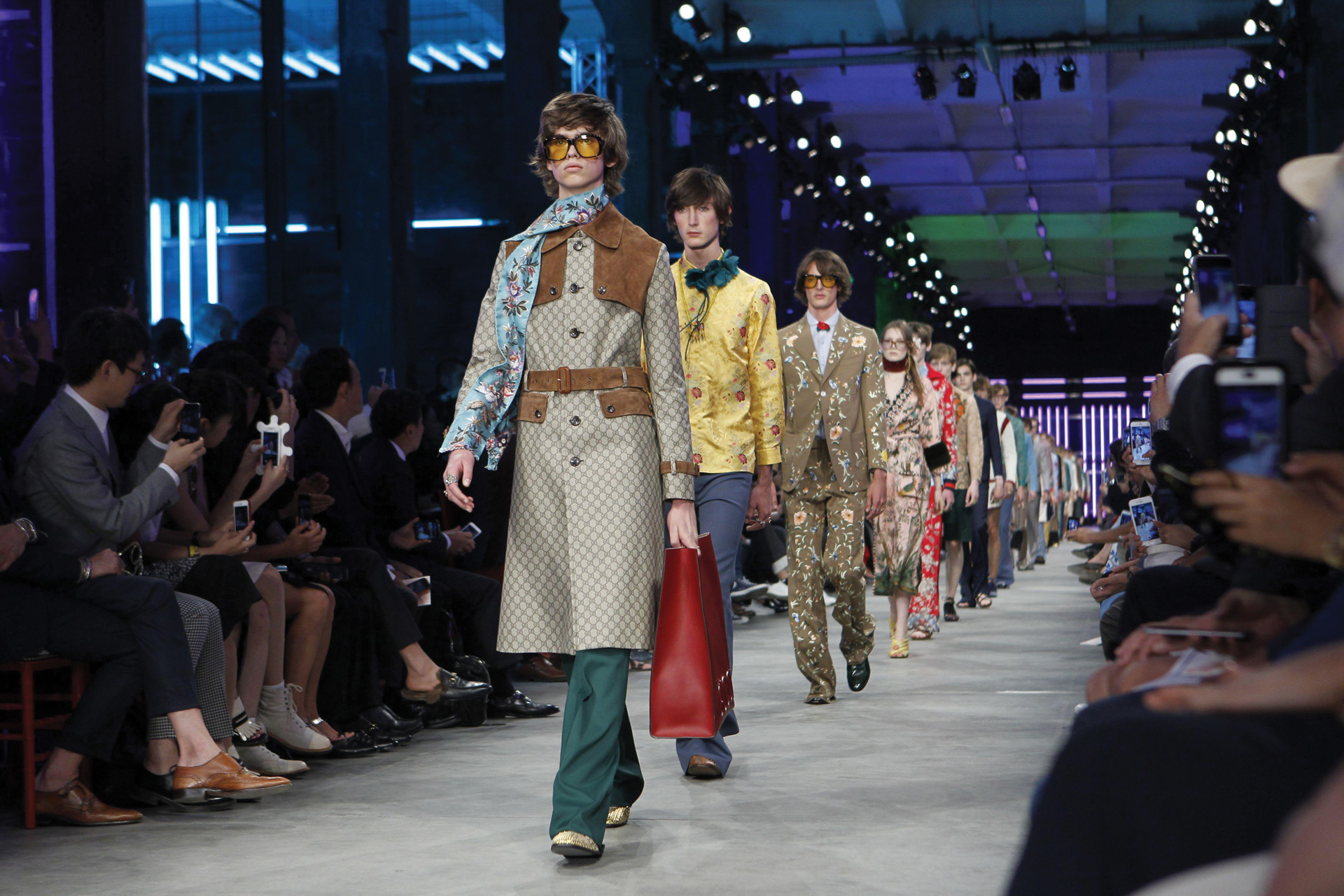 Michele’s take on the women’s collection is just as imaginative. Called Derive, Gucci’s spring/summer women’s collection bases its notion on the French Symbolist’s concept on the logical extension of another one, modifying prints and patterns. A process where Michele used his extraordinary craftsmanship into producing these wearable pieces of art.

With his unique vision and innovative drive, Michele has inspired the whole company with an innovative new direction, and has managed to captivate his market.The timelessness of the collections is representative of the vastness of Michele’s imaginations when it comes to designing. It looks like Gucci is in very good hands.