The bride’s got her frock sorted, but what about the groom? Don’t panic, Brandon Chau has a few tips to help you get your wedding look just right

It’s approaching that time of year when the wedding invitations start rolling in. For couples about to tie the knot, there is much to organise—and important decisions to be made. There is plenty of fashion advice out there for the bride-to-be, but what are the options for the groom? From waistcoats to white tie, our handy guide will have you looking suave and sophisticated when you walk down the aisle. 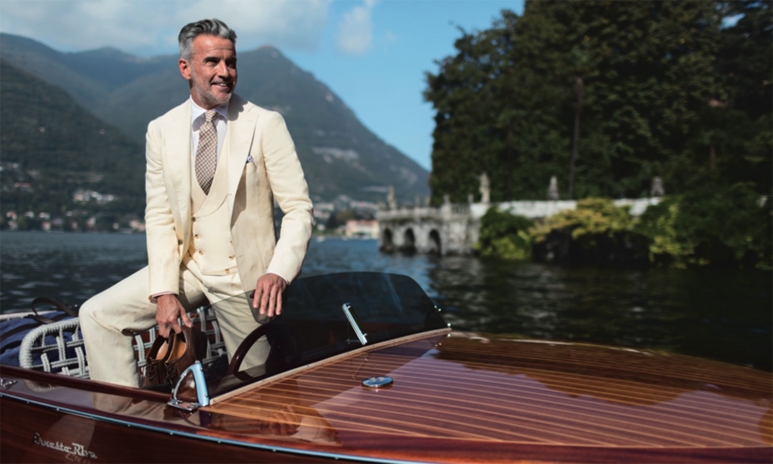 It’s your wedding day. If you really want to wear a silver three-piece morning suit with wingtip collar, matching ascot tie and white trainers—the classic rented outfit look—go for it. The most important thing is that you are wearing an outfit that is smart, dignified and suited to the occasion. Less is more. A solid navy double-breasted suit, perhaps? Team it with crisp white shirt and black oxfords, and a grey or silver tie. If that looks too much like you’re heading to the office, you could try a solid mid-grey single-breasted suit with a light-coloured tie—pastel green or blue would be good options. Try to avoid a black suit if you can; they can appear harsh in daylight. That is of course why it is customary in many countries not to wear black tie before 5pm.

In warmer climes such as Hong Kong, Bali or Phuket, a cream white linen or tan suit with or without a waistcoat is a dashing and appropriate option for a daytime wedding party.

Wear a Contrasting Waistcoat with Your Suit 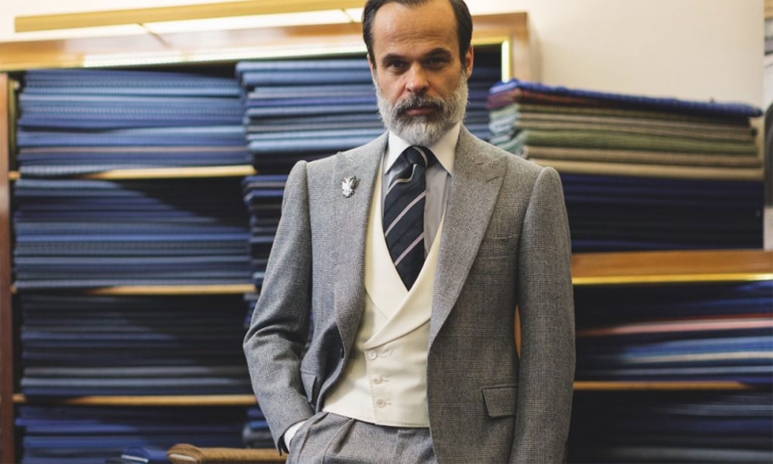 Photo courtesy of Lorenzo Cifonelli, by The Rake Magazine

Around the 1850s, gentlemen in the West began wearing “ditto” suits with a jacket, waistcoat and trousers made from the same fabric. Now known as a three-piece suit, it was seen as an informal choice because it simplified the tailoring process and was mostly worn for business, travel and street wear. Prior to that, waistcoats didn’t match jackets and trousers most of the time. A waistcoat was chosen to contrast with the suit fabric, similar to the morning dress worn today. A contrasting waistcoat can give a lounge suit a smart edge, elevating it to something more formal. There is no general rule for choosing a contrasting waistcoat, but cream or buff in plain wool or linen would be versatile. It could be single- or double-breasted with lapels, but double-breasted would be the most formal and elegant choice.

Wear a Buttonhole (Boutonnière) Instead of a Mini Bouquet 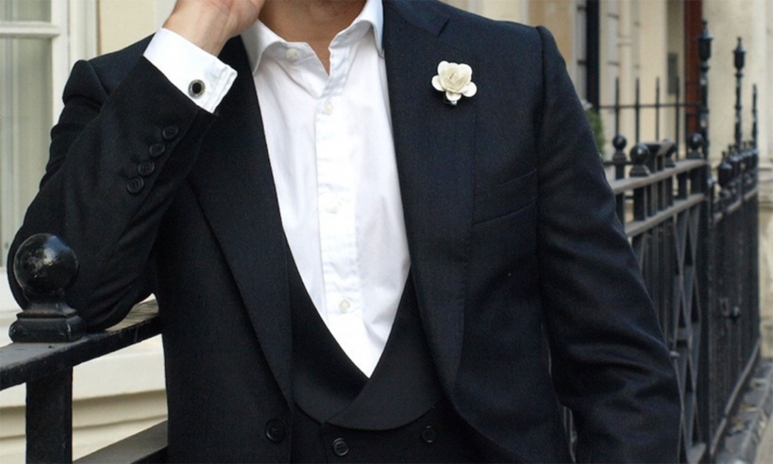 It is very common in this part of the world to see a groom wearing a mini bouquet pinned to the lapel of his jacket. But the flowers can be too much, and can make the outfit clumsy—not to mention the pinning, which damages the jacket. Again, less is more. A single small flower worn in a buttonhole on the lapel is a more elegant approach. It could be cream, red, pink, blue or even lilac; a rose, carnation, cornflower or lily of the valley—the key is that it should be small so that it’s not a distraction. Or forget the fresh flowers and go for something handcrafted from porcelain or silk, to add a playful touch to your outfit.

Wear a Morning Suit for the Day 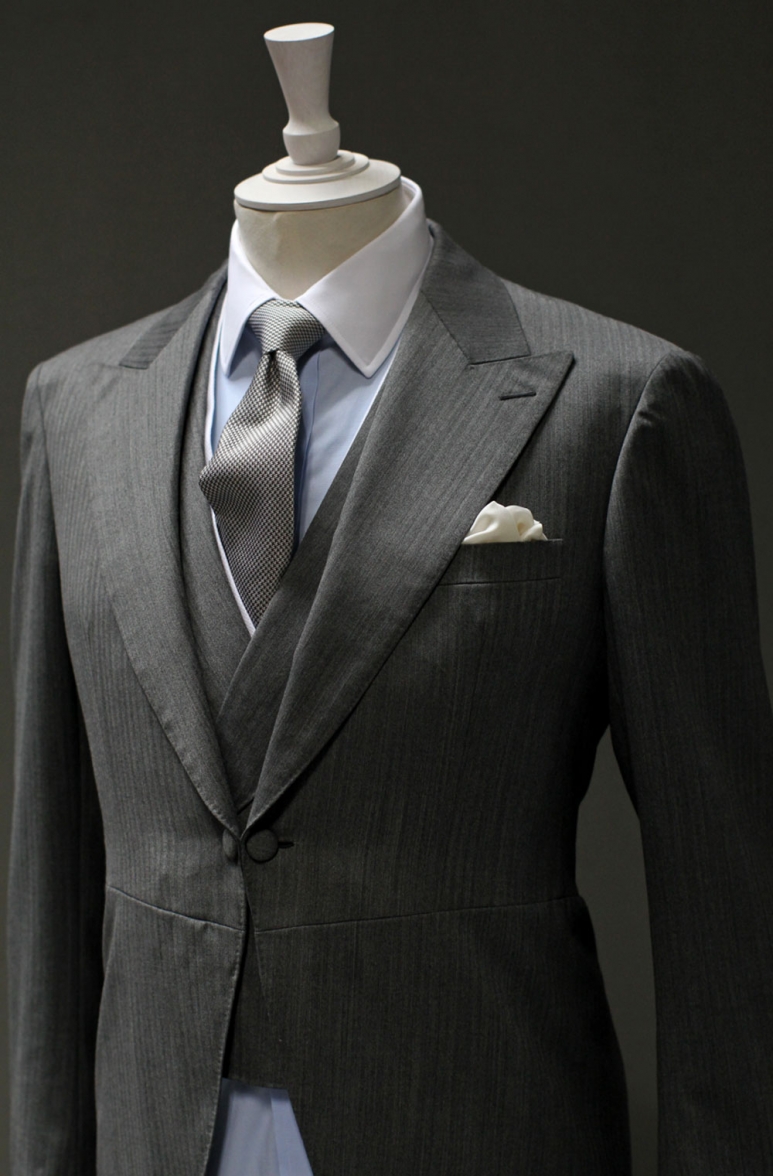 Nothing is more appropriate for a daytime wedding than the morning suit, the traditional outfit for a groom in Western culture. As the name suggests, it is intended to be worn during the day, before 5pm. Traditional morning coats are usually black, single-breasted with peaked lapel and curved front edges that slope into long tails at the back. Trousers should be black and grey pinstripe. Alternatively, a grey three-piece morning suit, perhaps in a subtle herringbone, would be slightly less formal but still smart. A turndown collar shirt in either blue or pink with a silver or grey tie would be smarter than a white wingtip collar shirt with an ascot tie. And a grey three-piece morning suit is appropriate for other occasions such as a formal horse racing meeting or a formal daytime garden party, so it’s a little more versatile than black. Prince Charles is known to be fond of this combination for Royal Ascot.

Wear a Dinner Jacket or White Tie for the Night 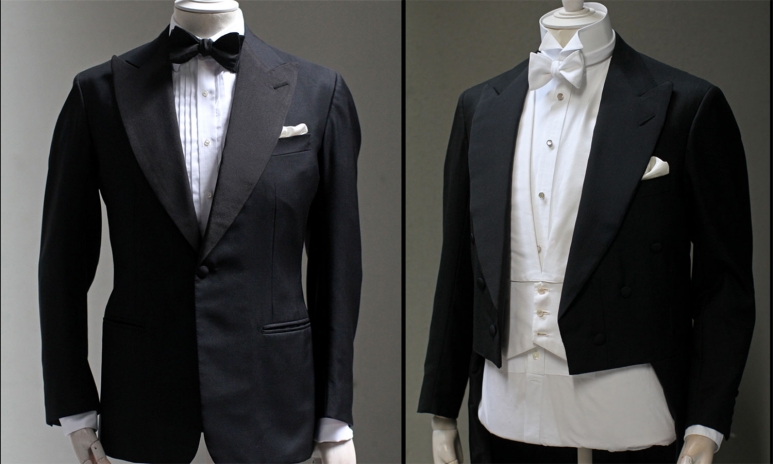 White tie is the most formal evening attire in Western culture, and these days it’s most often worn by maestros or attendees of gala balls. Also known as full evening dress, it is extremely elegant and perfect for your big day. But it must be tailor-made and could be quite an investment given that you may have very few occasions to wear it. White tie is cut waist-length at the front and sides, with two long swallowtails at the back that fall to the knees. The tailcoat is always black and cannot be fastened. The white marcella piqué waistcoat should be single-breasted and should not extend below the front of the tailcoat. A white dress shirt with detachable wingtip collar is the only choice here.

The alternative to white tie is black tie, with a dinner jacket or tuxedo. There are many variations of the dinner jacket but the most stylish ones are black, single-breasted with one button and peaked lapels, worn with a black cummerbund around the waist. A waistcoat with a U-shaped low opening at the front is a good alternative to the cummerbund. The dinner jacket could be black barathea or a midnight blue mohair mix. Black is the most traditional colour by far but midnight blue is suave—and it was the late Duke of Windsor’s colour of choice.

Menswear Spring/Summer 2022: The Best Looks From Prada, Fendi and More