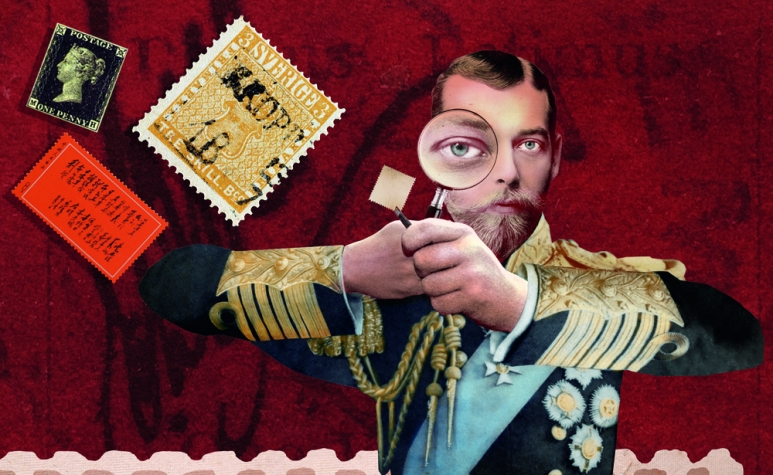 Any illusion that stamp collecting is a dying pastime of elderly enthusiasts clinging to a childhood hobby was emphatically shattered in two extraordinary minutes this summer. On June 17, a rare British Guiana one-cent magenta postage stamp (described as the “Mona Lisa of stamps”) was sold to an anonymous bidder at Sotheby’s in New York for a record-breaking US$9.5 million.

Measuring 2.5cm by 2.5cm, the 19th-century stamp from the former British colony in South America was described by the auction house as the most expensive item by weight and size ever sold. It smashed the previous record of US$2.3m paid at auction in 1996 for the 1857 “Tre Skilling Banco” Swedish stamp. Three other bidders
competed for the prize in those dramatic minutes—collectors from China and the Middle East as well as a representative of Queen Elizabeth II’s collection.

Yet it’s not clear if the bidders were avid collectors, investors or both. The one-cent magenta has been sold three times before, and on each occasion set an auction record for a single stamp, including the US$935,000 paid in 1980 by previous owner John du Pont, heir to the giant chemical company who was later jailed for the 1996 murder of Olympic wrestler Dave Schultz. The buyer can enjoy possessing the Holy Grail of stamps—but he or she can also expect to make a healthy profit down the road.

Stanley Gibbons, the premier stamp-collecting house established in 1856, publishes an annual catalogue that provides indicative prices and is recognised in the trade as the leading authority on philately. It also aggressively promotes stamps as an alternative investment.

“As an asset class, ‘investment-grade’ stamps offer portfolio diversification with consistent returns that are uncorrelated with stock markets or property prices, historically low price volatility, and a steady market characterised by rising demand and shrinking supply,” says Marco Kaster, investment director at Stanley Gibbons in Hong Kong. However, he adds, “Only one in a million collectable stamps meets the investment criteria.” Rarity, condition, demand and ultimately price are the main determinants.

But it has not always been a steady ride. A philatelic bubble burst in the UK during the 1970s after stamps had been marketed as a way to preserve wealth. Clive Feigenbaum was forced out as chairman of Stanley Gibbons in 1984 and had to abandon an early attempt to list the company on the London Stock Exchange following revelations of alleged dodgy business practices. In 2006, a pyramid scheme involving stamps in Spain and Portugal defrauded thousands of investors—and there have been periodic suspicions that stamps have been used to launder cash. Nevertheless, the GB30 Rarities Index, which tracks prices of 30 of the rarest and highest-valued UK stamps, has achieved compound annual growth of 10.1 per cent over the past 40 years. Since the 2008 financial crisis, the index has risen 68 per cent.

Stamps from Great Britain and its empire have dominated the trade since the art of collecting began. In the first half of the last century, George V’s obsession with the pastime led to the creation of the vast Royal Philatelic Collection.

The Penny Black has retained an iconic status because it was the first-ever prepaid postage stamp, initially issued on May 6, 1840. But during Queen Victoria’s long reign, around 12 separate printing plates were used to print 68 million Penny Blacks—though there are some valuable Penny Blacks, they’re not the rarest of all stamps. However, a block of 24 unused Penny Blacks, the largest collection in private hands and held in Stanley Gibbons’ vault at Hong Kong International Airport, has an estimated value of around US$1.8 million, according to Kaster.

But Britain’s pre-eminence in the stamp world is being superseded. There are an estimated 60 million serious collectors in the world—according to Kaster, a third of them are Chinese and another third reside in the rest of Asia. Expats remain the major market for British stamps, but Chinese buyers throughout Asia as well as Indian investors have created new, burgeoning markets. In particular, demand has surged for stamps from imperial China.

For example, there are only 14 unused “golden dragon” stamps known to be in existence. Those stamps were issued in 1897, and have their face value marked in cents and the old imperial currency—a strip of three sold at auction a few years ago for US$151,000. At the same Hong Kong auction, a set of four stamps from the Cultural Revolution featuring a design called “Mao’s 1968 Inscription to Japanese Worker Friends” has sold for more than US$1.15m. All told, the 600 lots, which also included stamps from Taiwan, raised more than US$12m.

According to a Stanley Gibbons study, between 1989 and 2012, 200 of the rarest investment-grade Chinese stamps recorded a compound annual growth rate of 11.6 per cent. There are now 15 to 16 auctions a year on the mainland and six dedicated stamp auctions in Hong Kong, with Chinese buyers making most of the bids. The leading auctioneers—Spink, InterAsia, Zurich Asia, John Bull, Dynasty and David Feldman—are all active in Asia, regularly receive 60 to 80 bidders at each event and take a hefty 15 to 20 per cent of the buyer’s premium. In addition, investors can approach specialist dealers, and online auctions are more prevalent in a worldwide market that Stanley Gibbons estimates is worth about US$6 billion a year.

Clearly, stamps can only make up a small part of an investor’s portfolio. The market in investment-grade stamps is much smaller than the headline figure, and collections tend to be held for the long term—so prized stamps often stay hidden for a decade. But the returns are steady, which matters more than ever when investors are concerned that other asset prices, such as stocks and property, might be ready to tumble. The greatest risk, says Kaster, is in “trying to do it yourself. Instead, you must seek expert advice.” Perhaps equally as important, it helps if you combine the mind of a shrewd investor with the passion of a collector.