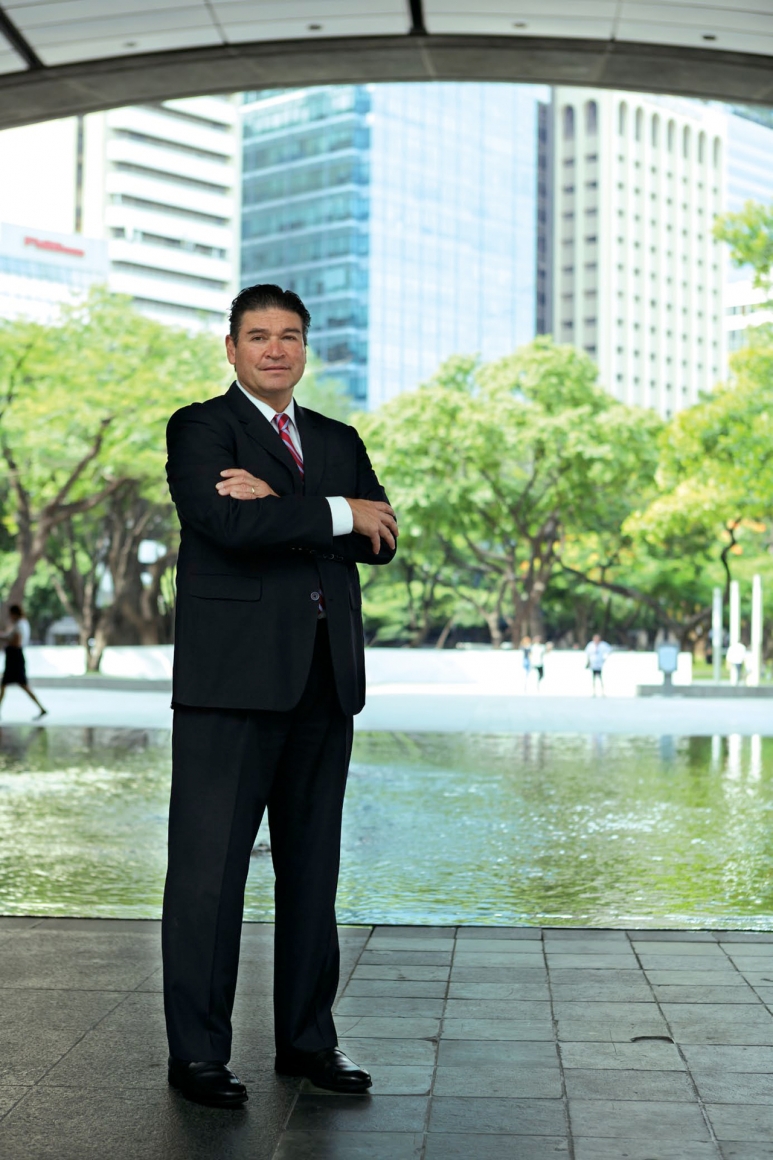 This  year has proven to be quite eventful for real-estate service veteran, Rick Santos. In January, he rebranded his company as Santos Knight Frank, Inc following the signing of a new long-term franchise partnership with Knight Frank LLP, the world’s leading privately owned global property consultancy.

The transition from his former partner, CBRE, has been seamless, retaining all 1,200 employees, 11 business lines, and maintaining an enviable market-leading position that has been built over 24 years.

“I gravitated towards Knight Frank because of all the international organisations that we approached, it had the most confidence in the Philippines,” says Santos, who remains as chairman and CEO. “It’s a real business where they put their clients first. In the world of property, there is a human element that is easily overlooked; and Knight Frank is firm on the importance of human interaction.

“Their international credibility complements our client-centric focus and leaves us more strategically placed than ever to continue to drive growth in the Philippine economy and, in particular, the real-estate sector.”

When the concept of outsourcing back-office functions to the Philippines was still foreign, Santos was already inviting businesses based in Europe and the United States to explore opportunities in the country. He has wasted no time in spreading the news of the Philippine success story to his new partners. “Over the last seven months, we have created outstanding relationships throughout the Knight Frank global network,” he says. “Together with my leadership team, I have personally connected with our leaders in the Asia Pacific region, the United Kingdom, the strategically important partnership with Newmark Knight Frank in the Americas and the market-leading Silicon Valley operations of Newmark Cornish & Carey in the United States.”

This relationship building, according to Santos, “has reinforced my view from last year that Knight Frank was the organisation best aligned with us to further drive growth in the dynamic Philippine market.” Over the years, the Philippines has become one of the most successful venues for the property market, and interest—in terms of both the residential and the commercial side—will not be waning anytime soon. As per Santos, the cost to acquire and develop properties is reasonable compared to other areas in Southeast Asia. Having a young population demographic also helps, as it entails a stronger work force with potential buying power. “When you have a work force that consists heavily of millennials, there are plenty of opportunities that retailers and developers can leverage,” he says. “We have young adults who are looking to move up in the world, open to spending money on luxuries and investments like cars and property. This strong buying capacity is what any market looks out for. Our people are our ‘secret sauce.’”

The real-estate market in Southeast Asia continues to grow and evolve, with the Philippines as one of the prime spots of interest for global investors. Santos foresees a sustained momentum in the real-estate sector due to the developments in infrastructure. Areas outside the city’s central business districts such as Cebu, Davao, and Clark are commanding attention from both local and foreign businesses.

Because of all this momentum in the real-estate sector, Santos does not see that his work is done yet or even nearly done. As such, even after a hectic start to the year, there is no talk of slowing down. One West and Two West Aeropark in Clark, Pampanga

“Even though I had studied and worked abroad, I have always wanted to return home and see what I could give back to my country of birth. To this day, we at Santos Knight Frank remain committed to our clients and to our long-standing vision of creating jobs, building a strong Filipino middle class, and driving the Philippines to become Asia’s economic powerhouser,” he says.