Travel across the Andes with a new standard in rail travel

Inside the Belmond Andean Explorer:

The asphalt disappears behind a cloud of dust as our minivan leaves the Chivay highway to turn onto a dirt road. From a distance, we see a white, one-storey building and hear the faint strains of a saxophone, so unexpected in the middle of this vast tundra that makes up this region of Arequipa, in southwest Peru. 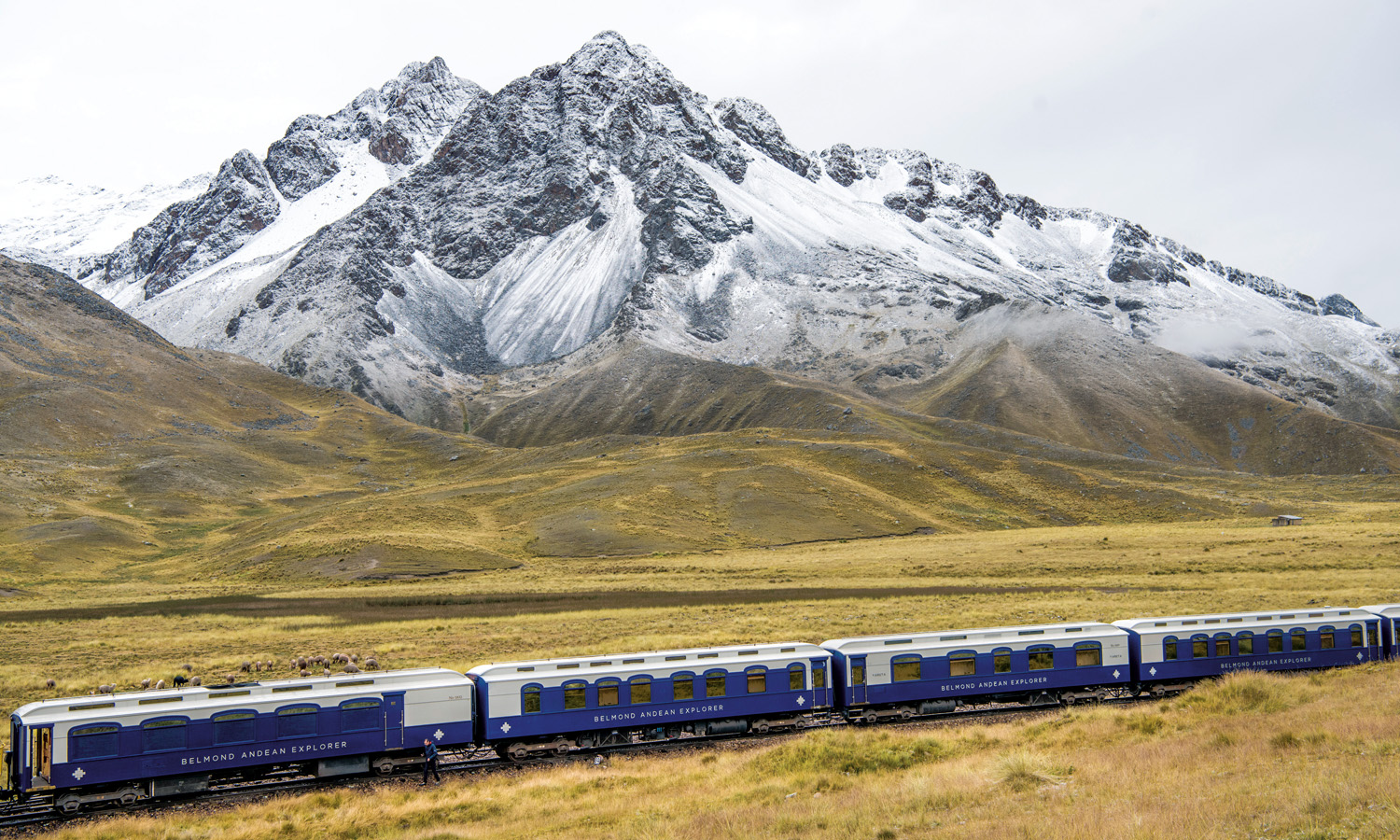 My travelling companions (a select group of journalists from all over the world) and I are here to experience the maiden voyage of the Belmond Andean Explorer, the first sleeper train to run along the Andes mountain ranges.

We are on an itinerary that explores less tourist-worn trails, on a rail route that reaches heights of up to 5,100 metres (16,000 feet), between the country’s ancient capital of Cusco, the snow-capped peaks of La Raya, and Lake Titicaca, one of the largest elevated lakes in the world.

Our attention is captured momentarily by a flock of lithe, wild vicuñas grazing nearby—they are prized and protected for their wool, which is softer and finer than cashmere. And then it’s back to the soulful saxophone playing as the sleek, elegant lines of our mobile home for the next three days come into view. 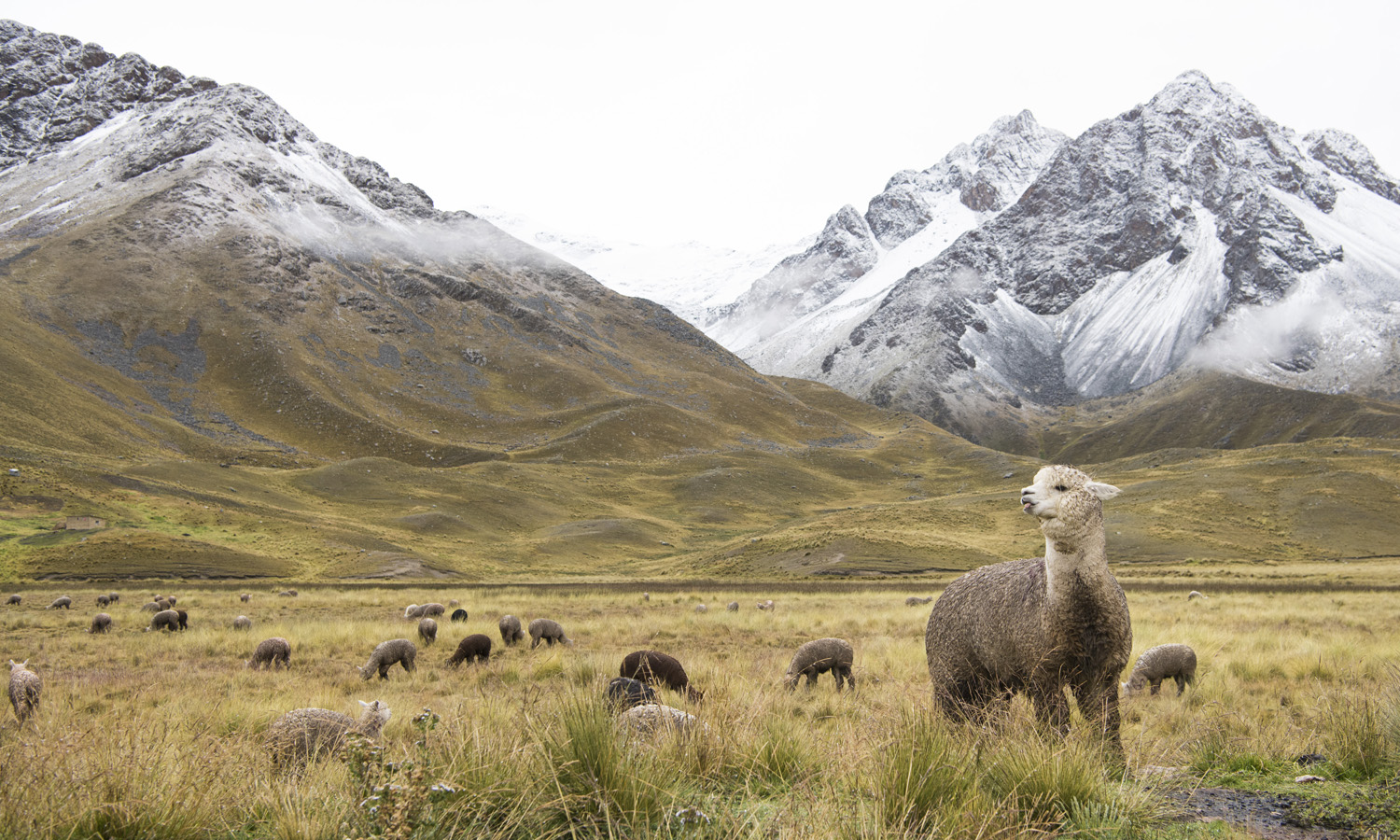 Alpacas are a common sight in Peru (Photo: Courtesy of Belmond/Matt Crossick)

It’s difficult to see where the train starts and ends, as each of its 16 cars is at least 20 metres long, brightly painted in white and blue and decorated at every end with a chakana cross, a holy Incan symbol of life.

Smart-looking uniformed staff lead us into the small building, where we are met by a welcoming committee of waiters offering champagne, wine—and for the non-drinkers, cups of coca tea, a popular herbal infusion made from the coca leaf believed to help cure altitude sickness and stave off hunger. 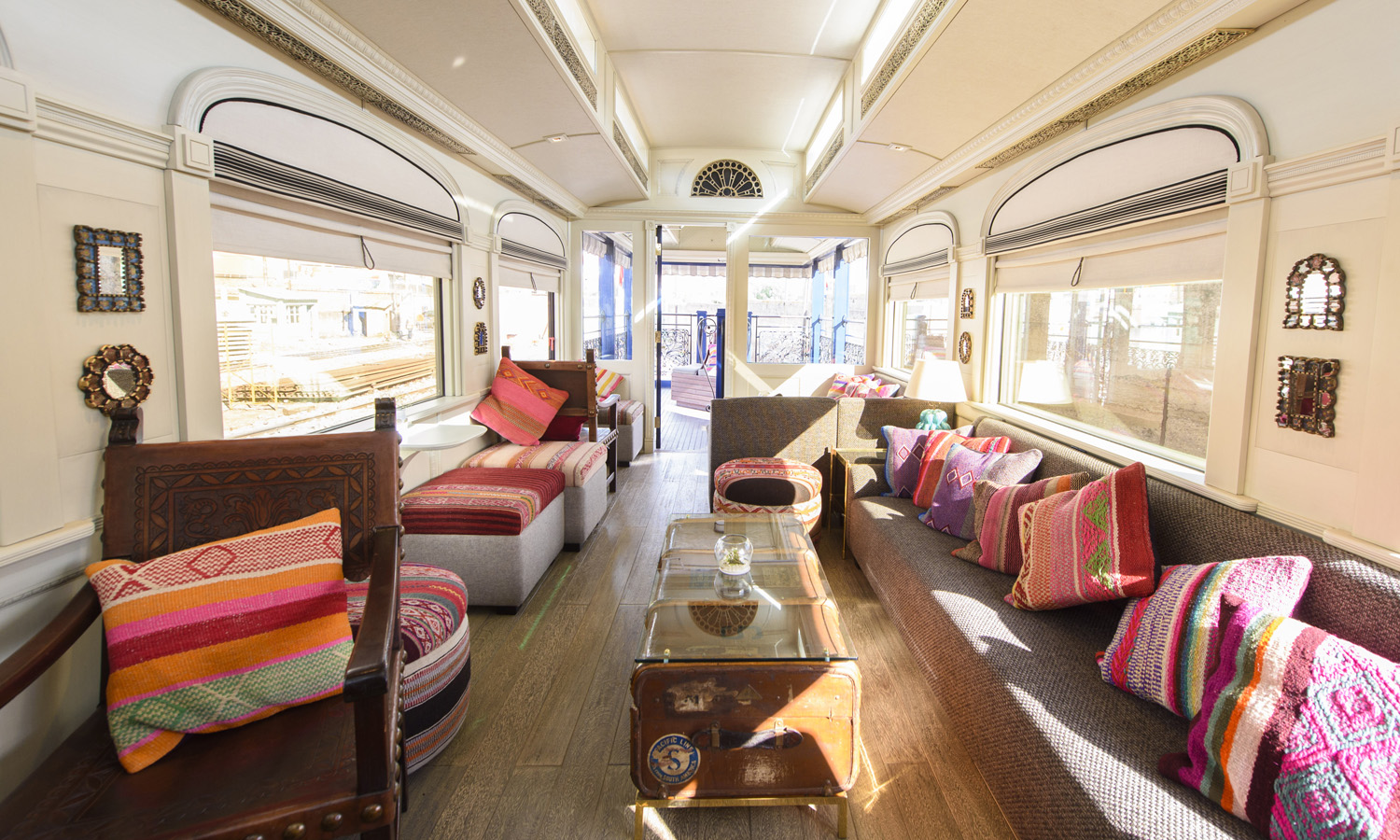 Step back in time with Belmond Andean Explorer (Photo: Courtesy of Belmond/Matt Crossick)

Stepping onto the Belmond Andean Explorer is like going back in time. With its mahogany panelling, intricate marquetry on the floors and art nouveau-inspired ceilings, it’s hard to believe the carriages were only built in Queensland in the 1990s.

The front section of the train houses all the cabins, which are all painted white and tastefully decorated, in light cream tones save for the bright blues and reds of the Peruvian fabrics that adorn the pillowcases and bedspreads. All the carriages are named after local flora and fauna, and each cabin has an ensuite bathroom with a shower, water closet and vanity—a true luxury for sleeper trains.

The largest rooms feature a plush double bed, a cosy seating area with two cushioned chairs, a small table (for journaling, perhaps?) and massive windows to ensure maximum appreciation of the rolling hills, glistening lakes and herds of alpacas and llamas that all play their part in making this trip memorable. 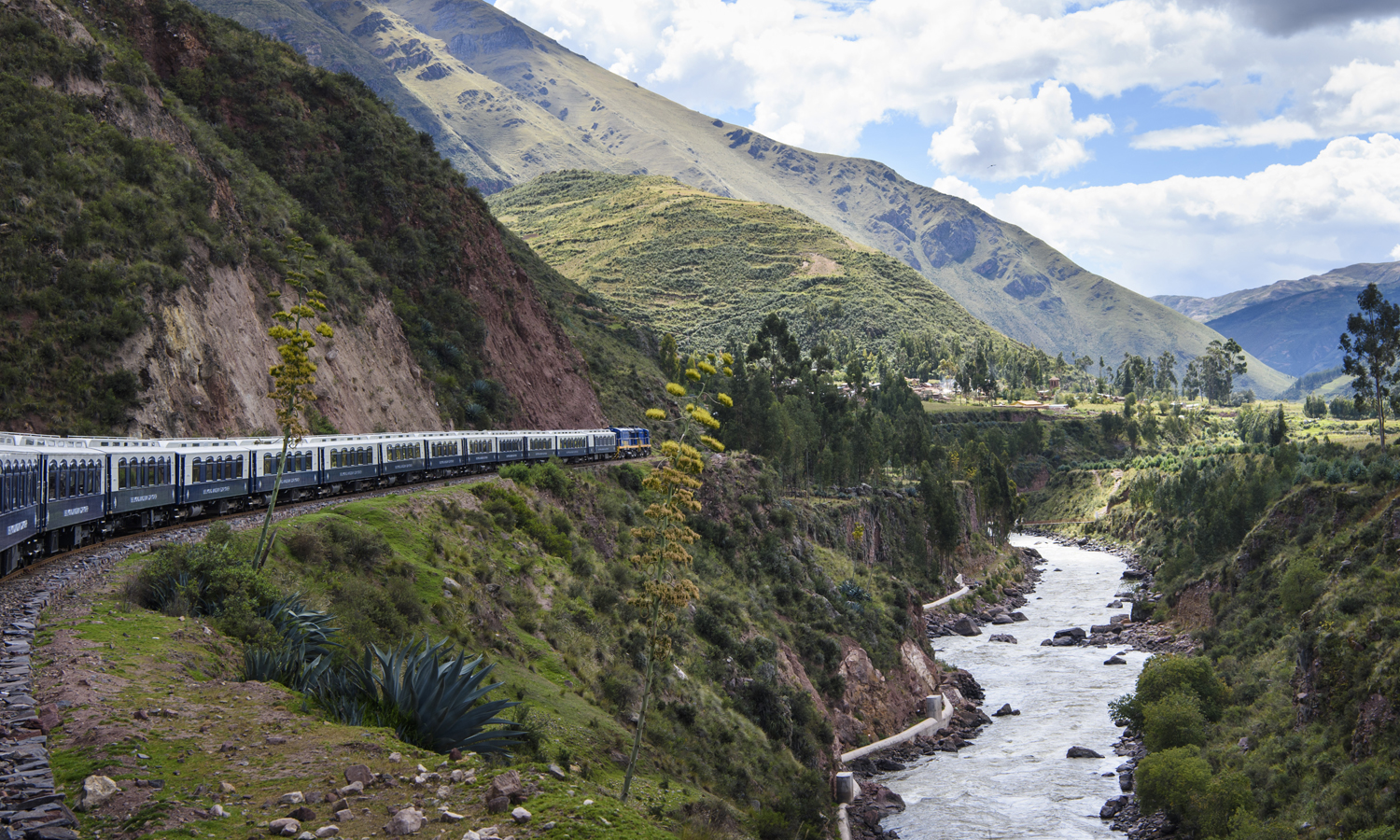 Don't forget to look outside the windows (Photo: Courtesy of Belmond/Matt Crossick)

A slight lurch of the engine, and we’re off. The train, which can carry up to 48 passengers, has been built for entertaining, with a lounge car complete with grand piano and live music in the evenings, a fully stocked and always-manned bar for that never-ending supply of pisco sours—or its local iteration, the sancayo sour, made from the fruit of a type of cactus.

There’s also a small library with volumes on Peruvian cities to visit, a gift shop and a spa. The caboose, an open-air observation car, is where you can appreciate breathtaking, 230-degree views of the varied Andean terrain, which encompasses volcanoes, grassland, desert, lakes and forest. 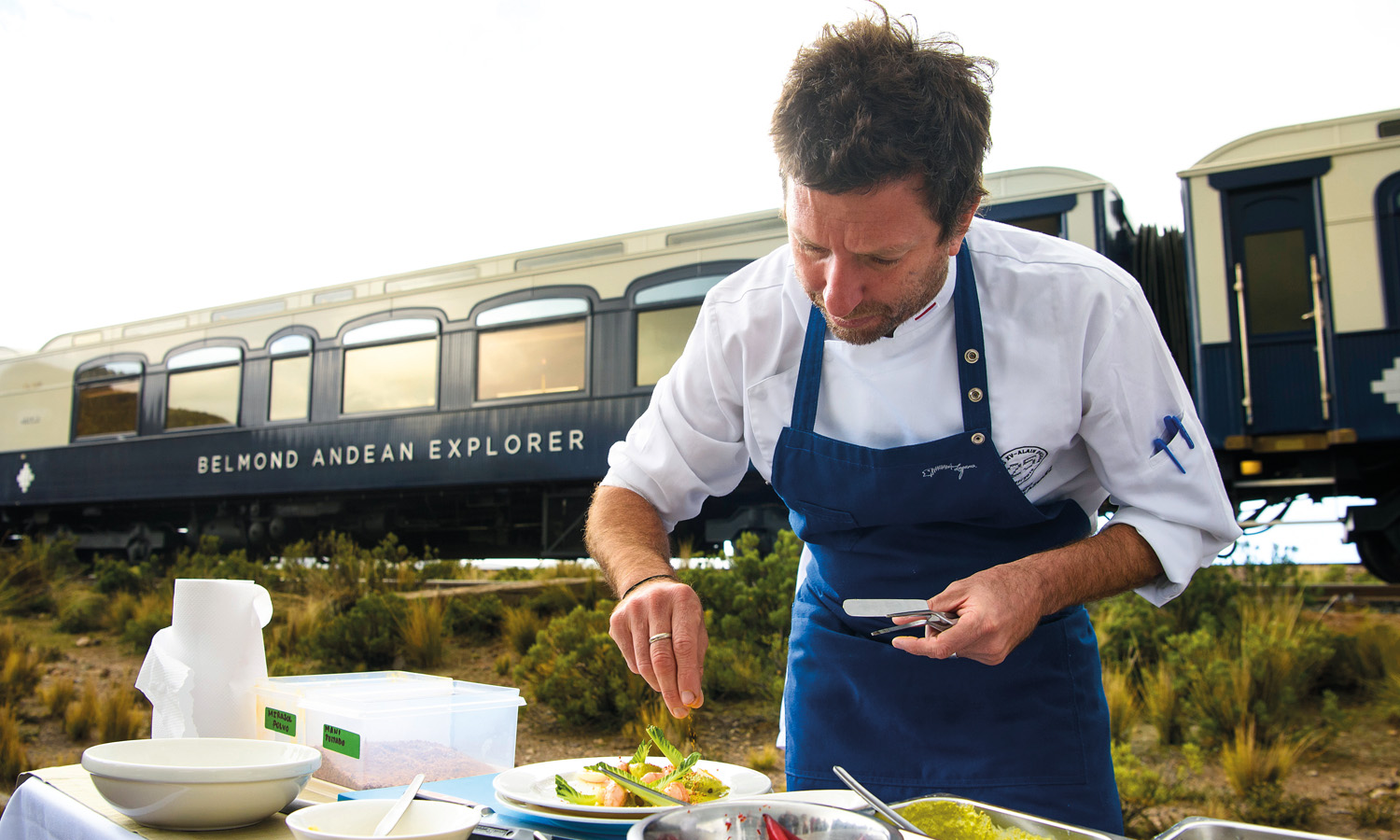 Imperceptibly the train builds up to top speed, and as the mountain ranges roll past, we are herded in one of the two dining cars to be served dinner, a flavourful spread concocted by none other than Diego Muñoz, one of Peru’s most accomplished chefs—who earlier that afternoon had engaged us in a cooking demonstration showing us how to prepare ceviche, Peru’s national dish.

As executive chef of the Belmond Andean Explorer, Muñoz has developed a colourful menu to highlight the dishes and local produce of each area the train passes through. For the first night, we start with consommé with alpaca tortellini, move on to duck breast with valley beetroot, and finish with arroz con leche (Peruvian rice pudding) with mazamorra (purple corn pudding) in baked strawberries and pineapple for dessert. Even petit fours were on theme, with candied concoctions like coca leaf macaroons and chestnut brownies.

Evening entertainment on the train can go on ‘til the wee hours, but sleep can come quickly for those lulled by the train’s constant rhythm. 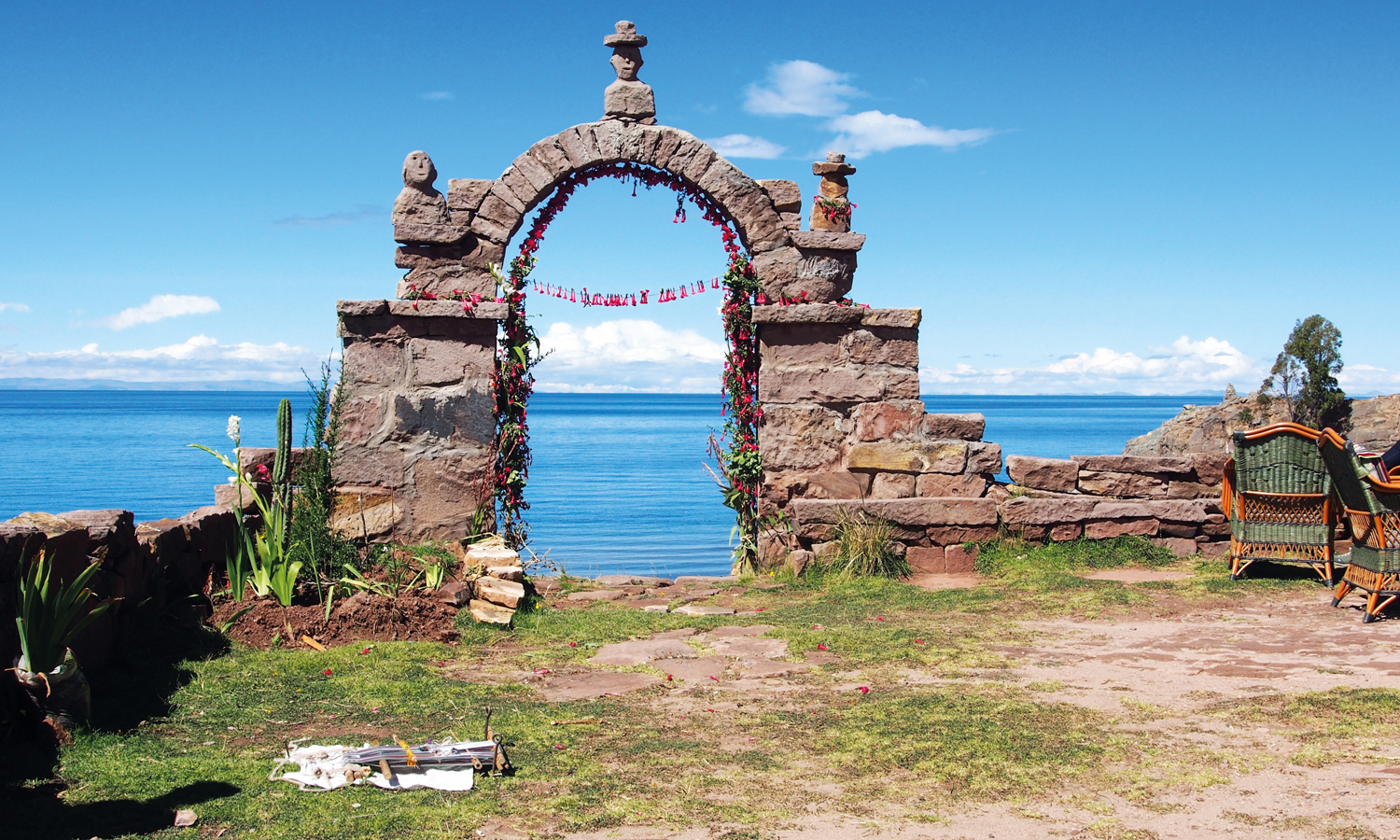 The next day we find ourselves in Puno, the starting point for our exploration of Lake Titicaca: the highest navigable lake in the world. Our extremely knowledgeable and polyglot guide, Walter, explains that we’re there to visit the Uros peoples, who’ve become famous for creating man-made islands on the lake when they were driven out of their homes many years ago.

Our boat cuts across channels defined by totora reeds, a plant the Uru community considers its lifeline. With its tall reeds and deep roots, they use it to build their floating islands, their teepee-like huts—and they cook it for food.

A group of Uru women and girls, all wearing brightly coloured skirts and embroidered vests, wave to us from afar. Wearing large straw hats and braids adorned with colourful tasselled yarn, their welcoming smiles shine through their sun-baked faces.

We step off our boat and land on what feels like a waterbed made of reeds. The island moves with the lake, but is anchored in place by several large branches that are attached to nearby reed plantations. There are about five families living in this 600-square-foot space, sharing four single-room houses. 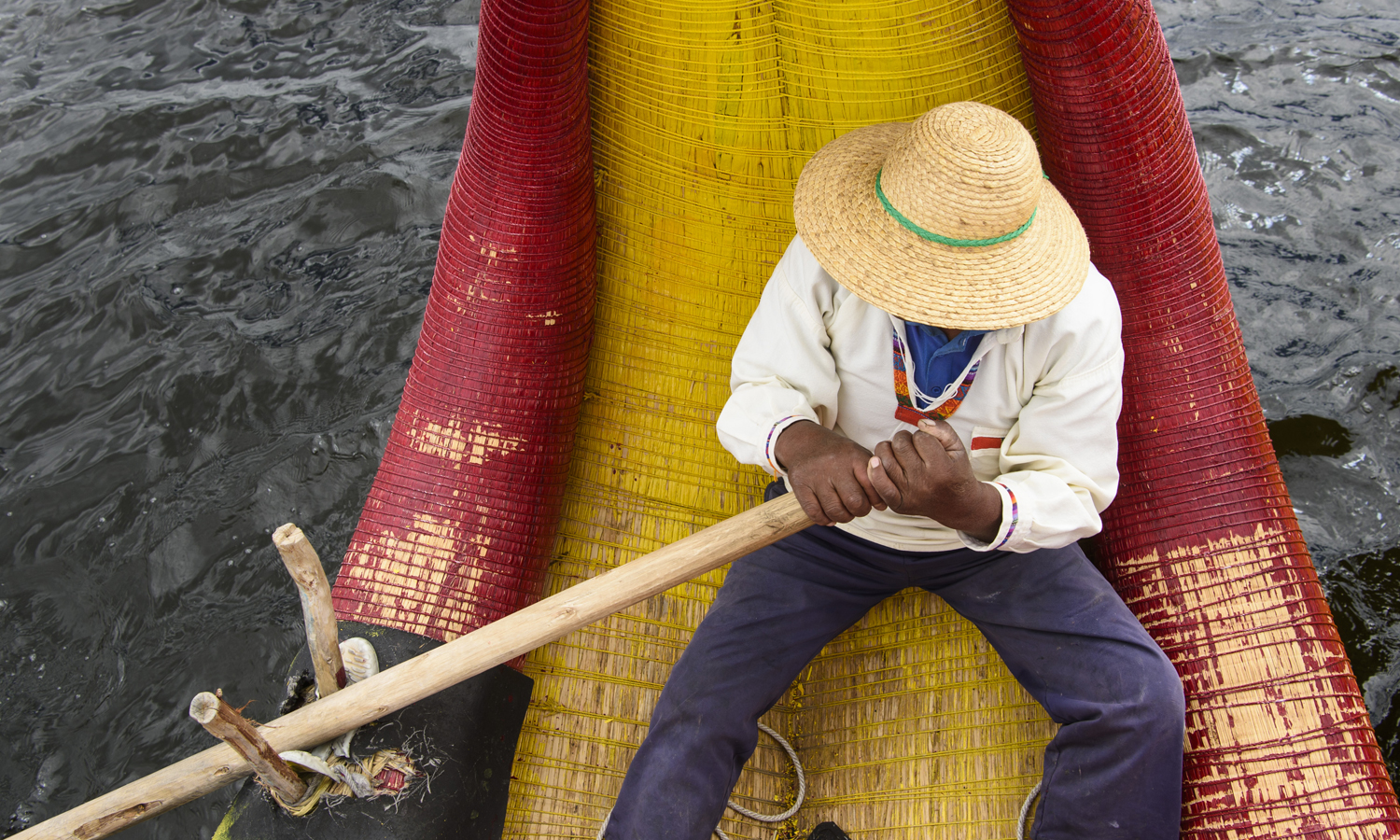 An Uru man on his totora reed boat  (Photo: Courtesy of Belmond/Matt Crossick)

We meet Javier, the appointed leader of this island, who talks about life on the lake. The men fish while women and children create crafts and hand-embroidered fabrics to sell. Spinning yarn and weaving intricate patterns thousands of years old are as important to everyday life here as farming and cooking.

We travel further along the shoreline, and after an hour reach Taquile, a natural island first inhabited by the Aymara tribes of the mainland, even before the Incas. We dock on a private, sandy cove where we are met with a group of local Taquile tribesfolk, dressed in their formal wear.

They’ve travelled from the other side of the island to greet us, the men in white long sleeved tops and cropped red vests, with colourful woven belts and bags that contain coca leaves, while the woman with them is in black, her neckline and waist decorated with colourful woven patterns. On her neck and arms are glittering paper fans, and her multitude of skirts form a puffy petticoat around her. 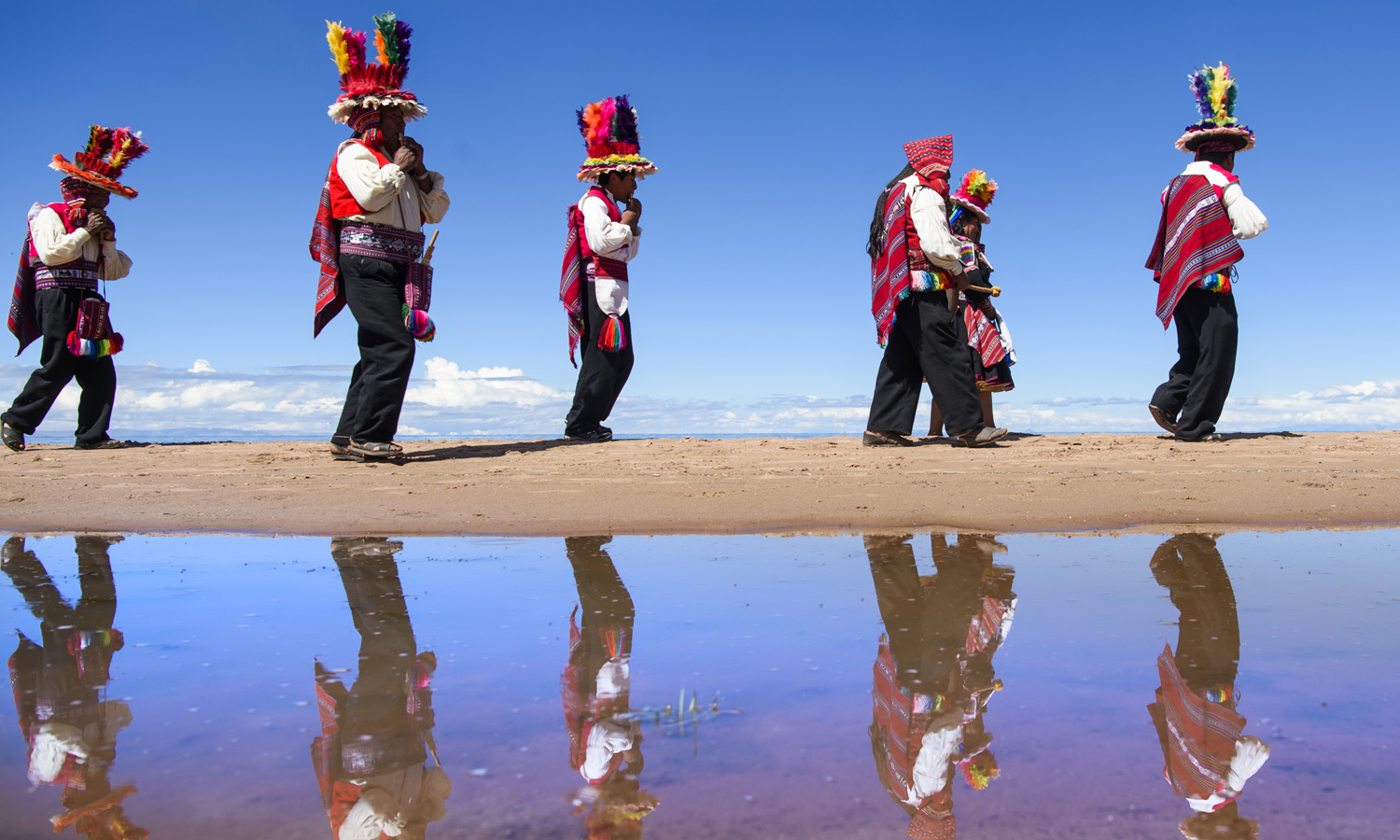 All of them wear hats made of large feathers in the colours of the rainbow, the same hues that represent the Incan empire. As the men start playing a tune with drums and small windpipes, the group starts to dance.

While we are mesmerised by the performance, the train staff who joined us on this excursion are busy setting up for our meal. They’ve brought champagne and wine, cheese from Puno, fried bread matched with a dip of onion, tomatoes and Peruvian green and red chilis called salsa de rocoto; oca, a variety of potato; and habas, like oversized edamame beans.

We walk a short way up to a small, clay house, where we’re served a lunch of grilled trucha, a trout found in the waters of Lake Titicaca, with a variety of vegetables and violet potatoes. It is a delectably satisfying lunch, and we were loath to leave. But after the conversation dwindles and we’ve downed our cups of muña and coca tea, Walter announces sadly that we have to head back.

The end of an incredible experience 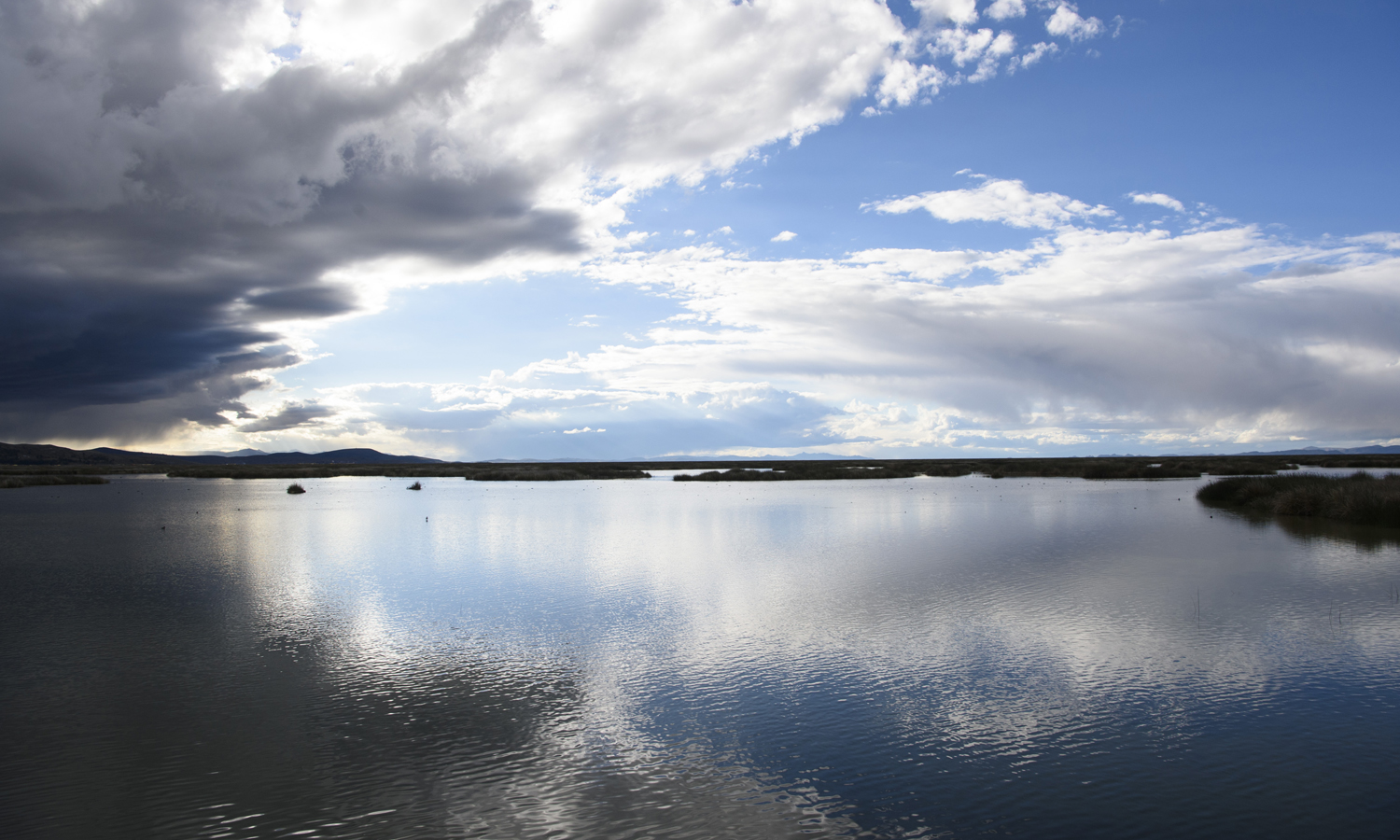 The view over Lake Titicaca (Photo: Courtesy of Belmond/Matt Crossick)

It starts to rain and as our boat docks in Puno, but the chill is warded off by a lakeside bonfire the train staff has set up, alongside warming cups of huajsapata: a hot drink of red wine, pisco, herbs and orange. A violinist plays in the background as we stare out onto the lake waiting for the sun to go down, eager for another enchanting evening travelling through the Andes.

Belmond Andean Explorer offers one- to two-night itineraries, inclusive of meals and beverages on the train. Planning a trip to Peru? Start by contacting one of the following luxury tour operators: Belmond,  Jacada Travel, Adios Adventure Travel, Lightfoot Travel or Abercrombie & Kent.

See also: These Are Europe's Top Destinations For 2017