Pearl Lam: Art, Ex-Boyfriends and the Merits of Frivolity

Glamorous gallerina Pearl Lam is on a mission to rid the world of homogenity. On the eve of the Hong Kong&nbsp;Art Week, we revisit our profile of&nbsp;one of the&nbsp;city's&nbsp;most candid and colourful artistic&nbsp;characters 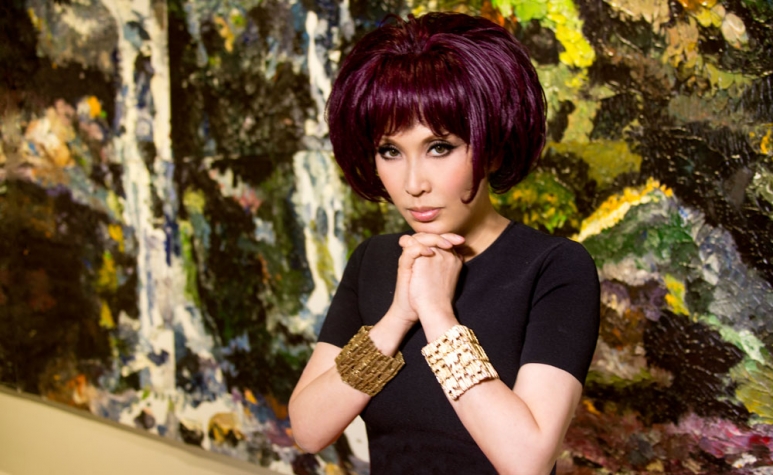 "Culture is getting so boring,” declares Pearl Lam in her husky British accent. Reclining on a couch at Sevva, Lam’s pseudo-office while she’s in Hong Kong, the magenta-haired maven sips tea and muses exuberantly on the finer points of Confucianism, colonialism and creativity.

Eccentric, erudite and candid, she’s the sort of person you can imagine would have relished a career as a perpetual student, had professional success not got in the way. “Globalisation,” she continues, “is promoting a homogenous culture, and this banal homogeneity is so bloody boring.”

Boring has no place in Lam’s worldview. A poster girl for individuality in life and art, she has forged a career out of rejecting convention. The daughter of Lai Sun Group founder Lim Por-yen, Lam spurned the prospect of working for her father’s property empire and flung herself, against his will, into the art world. Throughout the 1990s and the early millennium, her father treated her preoccupation with art and design as a flippant idiosyncrasy. When the Western contemporary art market exploded in 2004, and China’s a couple of years later, her peculiar obsession was rebranded as foresight and she was recognised as an authority on Asian contemporary art.

Fast-forward to the present day and Pearl Lam Galleries are now landmarks in Shanghai, Singapore and Hong Kong. This month, Lam expands her footprint from her existing space in the Pedder Building to a second Hong Kong gallery at Soho 189 on Queen’s Road West, which will focus on emerging artists. 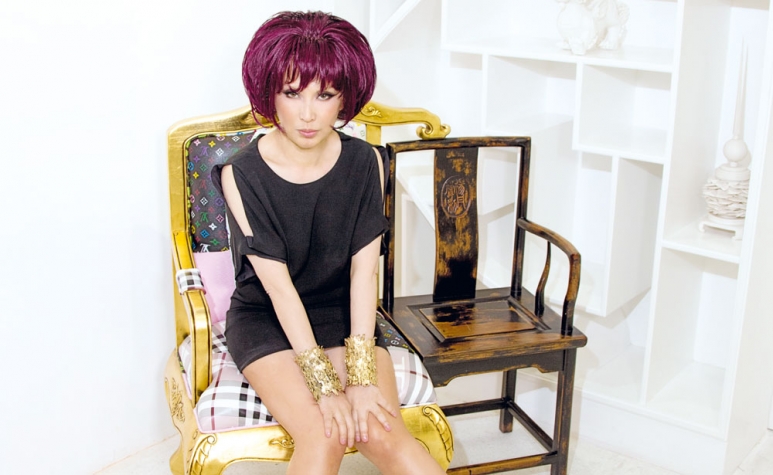 Lam’s mission, as she sees it, is to promote a sort of cultural relativism in art appreciation. “When we talk about contemporary art in the West, we talk about art which is derived from modernism. Our appreciation, our view, how we see things, all stem from Western art theory. But Chinese contemporary art does not necessarily derive from modernism,” she says. When Lam talks about globalisation promoting homogeneity, she’s talking about this blanket approach, one she feels is fundamentally flawed. “Our roots are so vastly different from those of the West, so we cannot use Western contemporary art theory to judge the East.”

Lam refers to herself as a bridge between East and West, but this wasn’t always so. Educated in Britain, she thrived in the cosmopolitan surrounds of London and appeased her father by earning a degree in accounting and financial management, followed by a master’s in law. She did what she had to do to stay in the UK. “I didn’t want to come back to Hong Kong to start my profession as my father’s daughter. I just wanted to lie low, get out of their sight, be as far away as possible, lead my own life and be myself. It was really hard to be myself [in Hong Kong] because I’m different. I didn’t want to be the norm—the nice girl.”

Lam was lured into the world of art and design when she redecorated her London flat. As her spending grew, her father saw it as “frivolous” and insisted she return to Hong Kong. She saw a solution: if her father wanted her back, she’d oblige—but armed with a career that would guarantee copious overseas travel. “I thought if I started a gallery, then I’d get to deal with international artists, so it would give me an excuse to leave Hong Kong as much as possible.” Art was the key to a life of independence.

Hong Kong in the early ’90s was galaxies away from the art-trading hub it is today, so her father was understandably unconvinced. “I didn’t send you away for 11 years to return as a shopkeeper!” he barked when she broke the news. If she wanted to buy “those things you stick on your walls,” then she should go to Shanghai and become a property developer in order to make enough money to collect art. Reluctantly, his daughter agreed.

Little did Lam know that Shanghai would be the site of her cultural enlightenment. Slowly, she learned to embrace her Chinese roots. “When I arrived, I couldn’t speak Mandarin. And I had this arrogance, this colonialism. I went there and I thought the world was mine.” She befriended members of the local art community and joined their meetings. Without the ability to speak, the young graduate was forced to listen—a challenging prospect for the naturally ebullient Lam. One day she’d had enough. “What’s wrong with you all?” she squealed, exasperated, via a translator. “In England and the West we talk about street culture, music, politics. And you guys are talking about Confucius, about Taoism. Who wants to talk about these traditional things? You’re really not with it. You’re really not cool.” 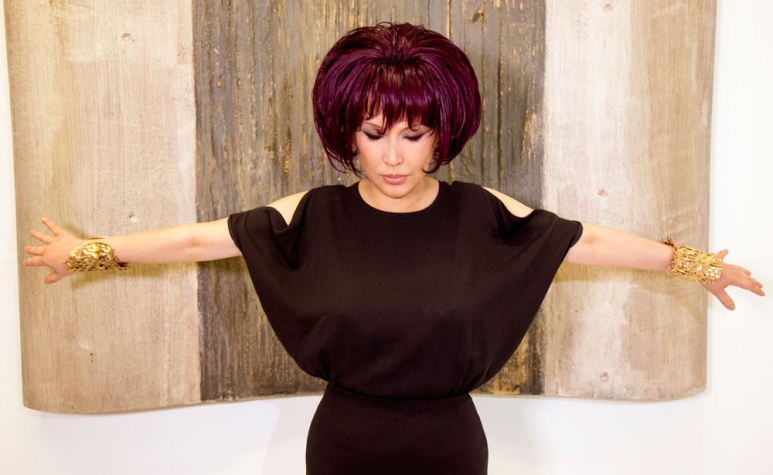 Then they told Lam that, actually, it was she who wasn’t cool. “Did I not know my Chinese history, they asked me. Did I not realise that even today I abided by Confucian philosophy? Respecting one’s parents is a cornerstone of Confucianism,” says Lam. So she did more research. “In the West in the ’80s and ’90s, we were fighting about the hierarchy of art forms—fine art versus design and decorative arts, and why there was no cross-fertilisation. But thousands of years ago, the Chinese had Bauhaus—the disciplines were already integrated. They had everything.” When Lam was a student she used to tell everybody she was a Hongkonger. “Ten years later I was telling everyone I
was Chinese, because I’m so proud of the Chinese culture.”

Reviewing her career, Lam admits she was lucky. “Art and economics always go hand in hand,” she says bluntly. “When China’s economy started to vibrate, people [naturally] started looking at its art and culture.” The rise of Chinese contemporary art was inevitable and Lam discovered her passion at just the right time.

Zeng Fanzhi’s The Last Supper currently holds the world record for the most expensive piece of Chinese contemporary art sold at auction, having fetched US$23.3 million in 2013. That price seems high until you compare it to those fetched by contemporary Western works, like Francis Bacon’s Three Studies of Lucian Freud, which sold for US$142.4 million that same year, or Jeff Koons’ sculpture Balloon Dog (Orange), which fetched US$58.4 million.

The fact that the auction houses continue to be the voice of art in Asia frustrates Lam greatly. “It’s completely not healthy. If we want to be able to stand at an equal level with the West in a cultural sense, we need to have a healthy infrastructure. That means the museums should be the voice of the industry. I am betting on M+. If M+ can set a high standard, that will encourage all the museums in Asia to raise the bar,” she says. “Only then will we be able to compete. Today we cannot, because of this attitude of art as investment.”

Lam has an extensive art collection of her own but remains tight-lipped about its contents. “Showcasing it now would not be good for the artists I represent,” she says, adding that she’ll exhibit it once her days at Pearl Lam Galleries are behind her. You can bet it contains a decent portfolio of Chinese abstract art—and very little figurative. The political pop art, which piqued the attention of the West in the early millennium, held no lure for Lam. “For a Western person coming to Chinese art, that was the easiest way in. But I think it’s a bit shallow.” 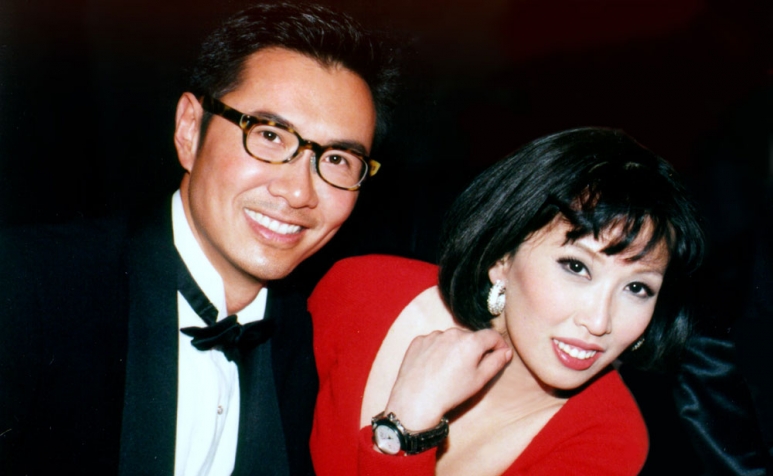 From the archives: Pearl Lam and William Louey have been close friends for decades. "He knows all my best angles," she says of William, who photographed her for this story

I ask her if she has a favourite artwork—the one piece of work she would take with her if she were forced to live out her days on a desert island. “I don’t care what artist it is,” she retorts, plumping her voluminous coiffure. “The artwork must be made of food. Artists like Jennifer Rubell make food installations. That would keep me going.”

This spritely pragmatism extends into her love life. Boyfriends are contingent on Lam’s schedule. “I need to have someone who can accept me as I am and accommodate my timing. I’m not a very good partner because I don’t take what the other person wants as priority. But,” she vows, “I’m a very good ex-girlfriend. I’m so nice to my ex-boyfriends. All of them call me at least once or twice a week. When a relationship finishes I always say, ‘You have been promoted now.’ So I have a big extended family.”

Lam sees art as a way to curate friendships with other cultures. She believes its diplomatic gravitas is such that it may even help minimise misunderstandings between countries. As our interview steers back into academia and politics, I make a quip about her father’s seemingly misguided perception of his “frivolous” daughter.

“Oh, frivolity is my bible,” she exclaims. “It’s a virtue. Just because you’re serious in what you’re doing doesn’t mean you have to take yourself seriously. You need to have a sense of humour.”