Amidst all the Olympics fever, we sit down with the architect who designed London’s Aquatic Centre

It’s a commonly held adage that an architect’s best work doesn’t happen until they hit 50 – at least. Frank Gehry is 83; Norman Foster is 77; IM Pei is 95. This is especially true for Iraqi-born British architect Zaha Hadid, whose fluid but unconventional designs only came to the world’s attention in the last 20 years.

Hadid’s greatest obstacles were and still are technology and funding, two fundamental hindrances to realising her architectural dreams. To this day, many of her crafted designs remain nothing more than celebrated ideas, though technology in the past 20 years has made them more of them possible now.

Take her first design for Hong Kong, for example. In her early days, she was commissioned to re-imagine the hills of Kowloon through The Peak Project. She proposed an excavation of the hills looking onto Hong Kong island to build a private clubhouse and spa. While The Peak Project never materialised into the gravity-defying structure it was designed to be, Hong Kong has seen its fair share of Hadid’s work: the Chanel Mobile Art Pavillion in 2008 (pictured below); and more recently, the to-be-constructed Innovation Tower for the Hong Kong Polytechnic University.

While Norman Foster may have taken the crown with his winning design for West Kowloon, Hadid’s firm also submitted a proposal in the initial round of the competition. “I’m interested to see how urbanity will translate in these [West Kowloon and Kai Tak] sites and the kind of transformation that will take place. I always think if you liberate a ground from being industrial, you need to add something other than normality. This is not always possible in an existing dense context. You have to invent density [in the area] where it currently isn’t dense, so I think Hong Kong should capture that moment because it is a unique time. These assets can be translated into cultural density.”

In my research prior to the interview, I read that she was supposedly quite upset with the quality control and the way the Chinese worked on her projects in China. However, Hadid tells a different story: “I don’t find Chinese clients to be hard clients, maybe it’s because I don’t work with them on a day-to-day basis. I’ll admit the culture is different, they want things done very quickly, in the West where something may take 10 years, in China they want it done in two. That requires an incredibly energised team and you have to take certain shortcuts which we don’t want to do. But in all, I can’t say it’s difficult.”

Moving away from Asia, those who watched American swimmer Michael Phelps triumphantly take his 18th and the last gold medal of his Olympic career will have gotten a thorough look at one of Hadid’s realised projects: the Aquatic Centre for the London Olympics. A world away from the iridescent blue Water Cube in Beijing, Hadid’s interpretation is more fluid than its predecessors as the geometry is based on the motion of water. Its wave-shaped roof together with its sting ray-like structure has a sitting capacity of 17,500 onlookers and houses the diving, swimming, synchronised swimming and modern pentathlon.

Needless to say, the building is unlike any other building in its surroundings at Stratford City but what many wanted to know was, is it quintessentially British? Hadid explains her assimilation vision: “Modernism is influenced by Japan, China and the Roman times as well, so the ideas [drawn from its host country] is not decorative, they are mostly conceptual. I find it very exciting to have the overall landscape interact with the urban landscape.”

For proof, look no further than the diving boards: they are made of concrete with a solid round base that slims in height and widens at the platform. The concrete used in the stadium is eco-friendly concrete and environmental sustainable, but that’s not what Hadid wanted people to focus on. “I don’t mean this in a patronising way but it’s only when you have no other ideas that they get stuck on [green design]. When in fact, it’s an integral part of design and design development.”

Dressed in black, Hadid’s wardrobe choice is both appropriate and subtle. “I used to wear a lot of silk wraps, but after I discovered Issey Miyake, that’s all I wear”. On the day of the interview however, she was wearing pieces from a young English designer whose shop she discovered in Milan and Ann Demeulemeester sandals to match, finished with metallic pink lipstick. “I would love to do a one-off fashion line,” she says, and I jump to attention. But alas, one of the greatest lessons she learnt early in life was the need to devote, focus and specialise. “I realise to do architecture well, I had to put my mind to it. With the same kind of attitude you can design anything – even a toothbrush”. 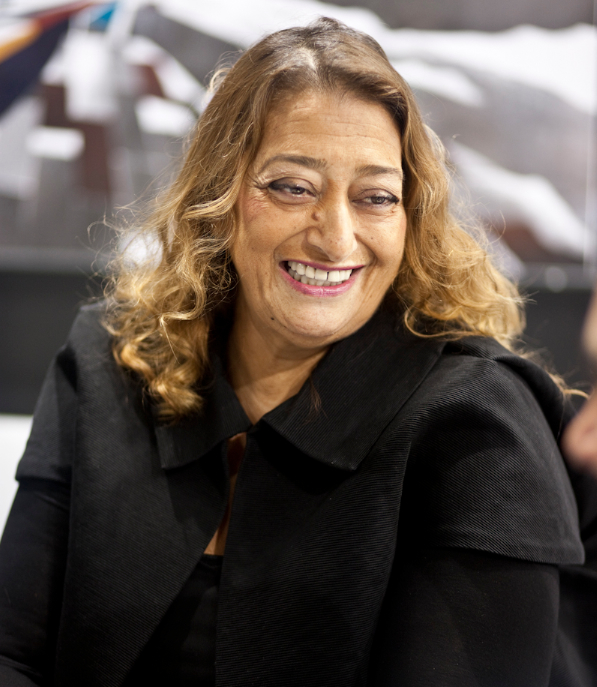 So what has the imaginarium of Hadid not conjured? There seems to be quite a bevy of things she still wants to conquer but the country she has her eye on the most is Russia: “I would be interested in constructing an airport or private museum. I’m doing a house in Moscow. Russia has an enormous influence on my work so I thought I would have lots of work in Russia – but I have not.” No rush, she’s only 62. That’s 26 in the world of design, I hear.