Chef Tony Boy Escalante shares the secret ingredients behind the success of Antonio's. The restaurant connects to a sprawling garden landscape that takes its city-weary guests into a state of relaxation.

There are many things to love about Tagaytay: the view of Taal Volcano is still a sight to behold, the range of resorts and boutique hotels to visit numerous, and the weather is always cooler than humid Manila. It also takes just under two hours to get there by road from Manila. Then of course, there is Antonio’s.

This fine-dining destination has its roots in hard work and quality produce, the core values of the Antonio’s Group of Restaurants (Antonio’s and Breakfast at Antonio’s, and The Grill by Antonio’s). When Tony Boy Escalante, the creative mind behind the restaurants, took up culinary studies at Regency Park Institute of Tafe in Adelaide, Australia, he and his wife Agnes had already bought a farm in Cavite, entertaining some ambition for it but none that matched its present achievements. He returned to Manila to advance his culinary career, but these early years were not without their challenges. With an important apprenticeship at Mandarin Oriental Manila’s French kitchen, Tivoli, the chef recounts his weekday dinner services. “There I was, fresh out of culinary school, training under the chefs Norbet Gandler and Humphrey Navarro, without a pay cheque,” he says. An anteroom in the restaurant compound

Escalante, however, had been tasked with the “special assignment” of taking care of Mandarin Oriental’s visiting chefs at least five times a year, which he was so good at that he received the nickname “The Ambassador.” His rewards were hard-earned but quite the bounty. “The interactions with chefs of such high calibre, the knowledge gained, and experiences shared still serve me well in my own kitchens to this day,” Escalante says. His time at the hotel also allowed him to see the possibilities his farm offered, leading up to the establishment of Antonio’s in 2002. 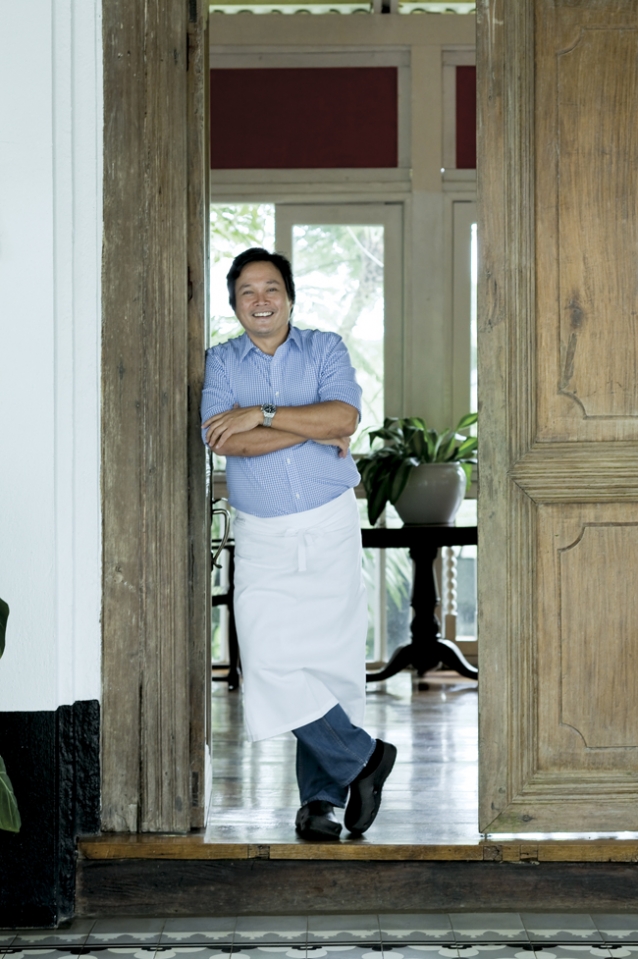 “I have never been completely comfortable with the idea of fine dining,” the chef says. “That’s a label other people have given to Antonio’s.” Countless patrons and first-time diners have returned to the city with this perception: a restaurant in a farm that sustains its quality produce. The ambience is most romantic, and many couples who have made the three-storey home and lavish garden their wedding reception venue will agree. Antonio’s is regionally, if not internationally, acclaimed, making it to the Miele Guide year after year since 2008, alongside culinary giants like Iggy’s in Singapore and L’Atelier de Joel Robuchon of Hong Kong in 2013.

“For me,” Escalante continues, “the idea is simple. Antonio’s is about marrying the best ingredients available with well-executed, classic technique on every plate. Plus consistent gracious service: we work to give the best possible dining experience all the time.”

Through all of this, Escalante exhibits an energy that pays respect to heritage and allows the transformation of his passion to food. Remembering his time in Adelaide, he learnt to make the German roast pig speciality, Spanferckel. “Oddly,” he says, “they don’t eat the skin. As any Filipino will tell you, that is practically a mortal sin.” So when he started serving the dish at Antonio’s, he kept the original recipe but deboned the pig before roasting, producing a tender meat with crispy skin. The mere description of this dish, with the mention of applesauce, horseradish, and grainy mustard, already causes the mouth to water. Escalante’s passion for travel allows him to bring home European inspirations for the motherland to taste. Before an expansive selection of raclettes – almost all of which he tried at a restaurant in Zurich, Switzerland – he came across a creamy chicken liver pâté. He brought this back to recreate as Antonio’s signature dish, the Pâté de Foie Gras Raclette, which is also his personal favourite. After that, another trip inspired another dish. “While travelling through Carcassonne in the French Riviera in 2012, I tried a unique take on the classic steak tartare,” he says. “They mixed small portions of sharp blue cheese to the raw meat. It was so good that I had to make my own version. Keeping the blue cheese idea in the mix, I omit the traditional raw egg from my version and flavour the dish on the spicier side. Delicious.”

The chef’s personal touch is what makes people go back for more. But the setting in breezy Tagaytay also plays a part. This year, Antonio’s introduces another attraction. “For over a decade, Antonio’s has not had a proper bar or lounge. We thought it was about time,” he says. The compound’s sprawling garden makes way for the Lanai Lounge, an outdoor cocktail bar that honours the classics but also takes an Antonio’s spin on some items on the bar list. “One special feature of the Lanai Lounge will be our Gin and Tonic Cart, basically a rolling bar serving guests our own special twist on this cocktail standard.” With every item on Antonio’s menu always bringing a pleasurable delight to everyone’s tastebuds, this addition is surely something to look forward to.

Read the full story in the March issue of Philippine Tatler, available now on newsstands and bookstores. | Download the digital version from Zinio or Magzter.