Inside the Most Luxurious Airline Cabins in the World 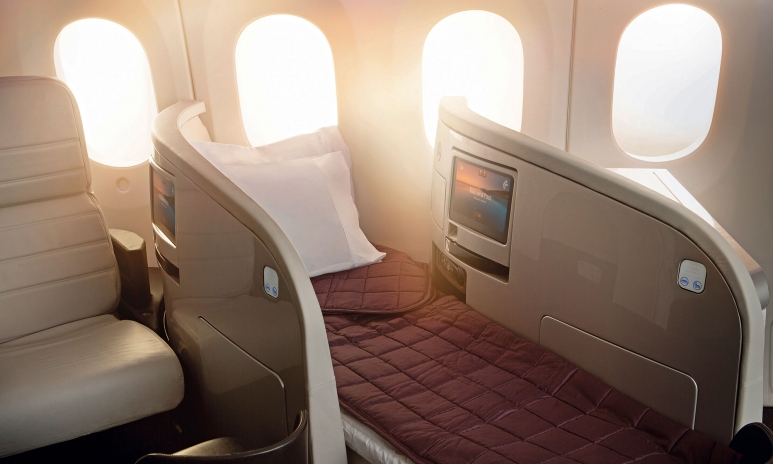 It was the late 1950s and Pan American World Airways was earning itself a reputation as the greatest airline on the planet. Pan Am, as the airline would become fondly known, was a pioneer in many ways, not just for its rapid global reach, but also for its style, glamour and sophistication. When the airline ordered 20 Boeing 707s in October 1955 and became the first to operate them three years later, on the New York-Paris route, commercial jet flights were born and a new level of service was introduced that would become the pinnacle of flying: first class.

Until this point a first-class style of service was offered on many flights—usually on planes decked out entirely with luxurious seats—but the 707 was the first to have two standalone cabins, including one that would feature restaurant-quality meals, champagne and far superior seats. Guests, primarily on non-stop transatlantic flights for the first time, were treated to freshly prepared roasts, lobster mornay and some of the best wines in the world.

As other airlines took delivery of the Boeing 707, including Qantas, the first outside North America, as well as McDonnell Douglas’ competing DC-8, first class became the cabin everyone wanted to fly in. 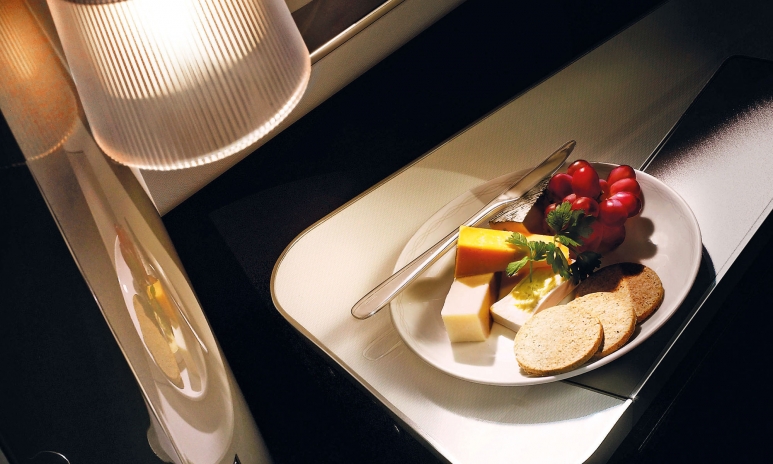 The ante was upped again in 1970 when the Boeing 747 jumbo was introduced, with Pan Am again the launch customer, featuring a bar and lounge in the airline’s bubble, now known as the upper deck. Once the Boeing 747 was delivered to other airlines around the world, the challenge was on to see who could offer the most glamorous first-class experience in the sky, including lounges located in the nose or the bubble.

Airlines such as Qantas, Singapore Airlines, British Airways, Sabena (the former Belgian flag carrier) and Japan Airlines all created lavishly appointed lounges in the new-found space of the jumbo jet, some boasting a piano bar, others tables and chairs laid out like a hotel cocktail divan where only top-shelf spirits were served. Cathay Pacific launched its inaugural first-class cabin on the Lockheed Electra in 1959 and its vibrant Marco Polo Class dominated the aviation scene in Asia during the 1980s. 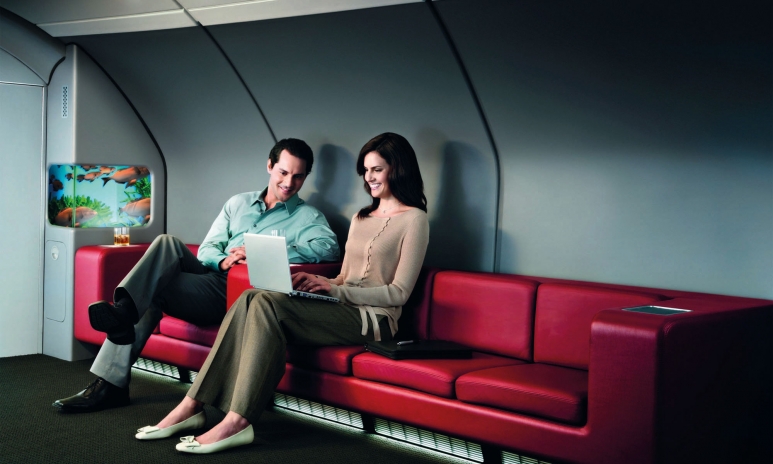 Lounging around on Qantas’ A380

At the same time, another aircraft was garnering attention as one of the smallest jets in the sky but the fastest ever. Arguably the most gracious, elegant, forward-thinking commercial airliner ever to take to the skies, Concorde entered service in 1976 and continued commercial flights for 27 years.

The experience, as this scribe found out in 1989 as a lucky 11-year-old, was unlike any other. Flying at supersonic speeds at over 60,000ft, passengers could see the circumference of the earth during a journey from Paris to New York that took just over three hours.

They sat in slimline seats, ate Beluga caviar and drank vintage Dom Pérignon champagne. Despite Concorde’s controversial retirement in 2003, a group of jet enthusiasts called Club Concorde—made up of ex-pilots, airline executives, engineers and enthusiasts—are behind a US$250 million operation to return one of the retired aircraft to the skies by 2019. 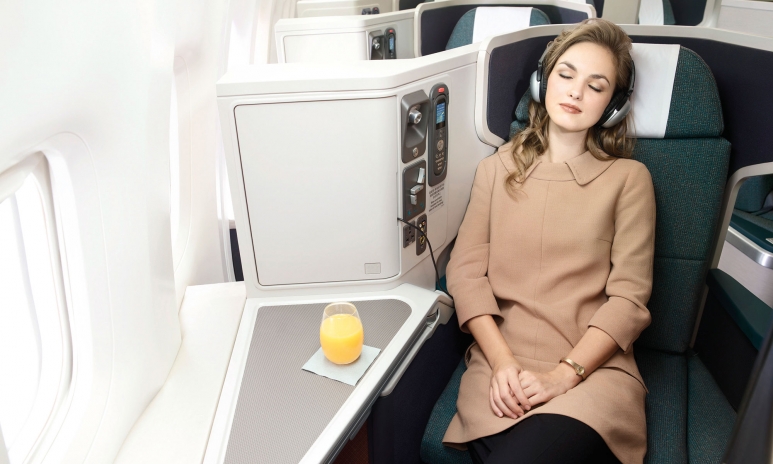 By the late 1970s airlines had started work on a third cabin, dubbed business class, which made its debut on Qantas, British Airways, Air France and Pan Am before the end of the decade. As a relatively affordable option between economy and first, business class quickly took off and became an overnight industry standard.

Soon those elegant first-class salons in the sky, such as Qantas’ Captain Cook Lounge on the upper deck of the Boeing 747, were replaced with first-class or business-class seats as airlines began to maximise revenue while toning down some of the perks.

Sleeping arrangements continued to evolve, however. In 1995 British Airways revolutionised the way we sleep in the sky with the introduction of flat-bed seats in first class for the first time, and four years later it was the first to introduce them in business class as well.

Since then, business-class offerings have constantly improved, with many airlines now dumping first class in favour of enhanced business, premium-economy and economy cabins, with business now what first used to be, and premium economy more resembling vintage business than economy.

In 2003, Virgin Atlantic created the revolutionary Upper Class cabin, which was positioned by founder as a hybrid of first and business; it featured the longest seats in business and heralded the return of the on-board bar, complete with stools and inflight massages. 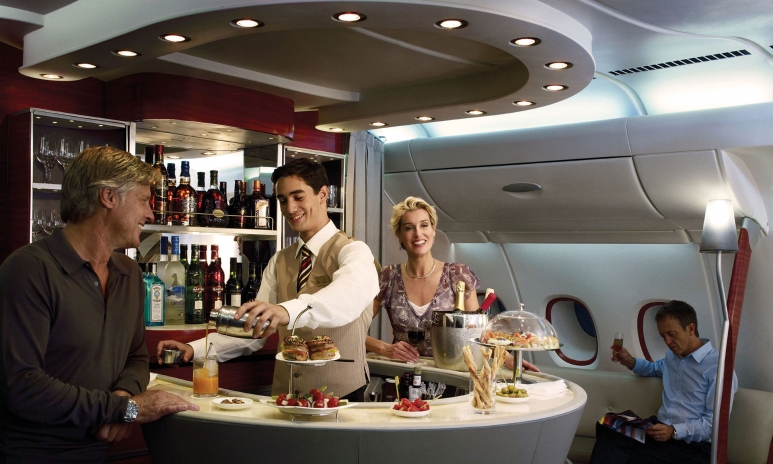 Cocktail hour on Emirates’ A380

Virgin, as well as Qantas, was also among the first to offer designer pyjamas and amenity kits in business class, trends that have gained global traction; Qantas has since collaborated with Kate Spade, Emirates with Bulgari and Abu Dhabi-based Etihad Airways with La Prairie and Swarovski to create luxurious kits for premium fliers.

As airlines shifted towards improved business-class cabins in the early 2000s, another remarkable new jet was taking shape: the Airbus A380. It wouldn’t be faster than Concorde, but it would be the largest passenger plane ever built, capable of flying up to 850 people across the globe for 14 hours.

The additional space offered by the super-jumbo had airlines reminiscing about the golden era of the first 747s, and launch customer Singapore Airlines developed.