Chris Evans on Trump, Taoism and His Move into Directing

Captain America’s alter ego Chris Evans makes being a superhero look easy, but the real superpower, he tells Madeleine Ross, is the ability to quiet your brain when the noise gets loud 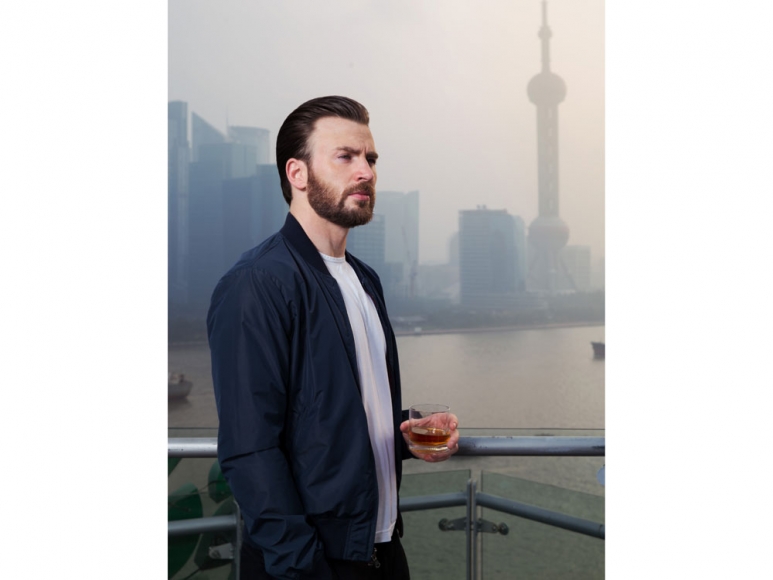 On the Bund in Shanghai. Image courtesy of Chivas Regal Ultis

If you tried to sketch his character from his résumé alone, you’d peg Chris Evans as an affable, swaggering, red-state jock whose raison d’être is fame and a large pay cheque. The 35-year-old actor is king of the blockbuster superhero genre; he’s played Captain America in three eponymous Marvel adaptations and two Avengers movies, and has starred in three Fantastic Four films. Peppered throughout this CV of box office record-breakers are teen flicks and romcoms. He was the high school heartthrob in Not Another Teen Movie and the “Harvard hottie” in The Nanny Diaries.

His mass-market career trajectory, however, seems to jar with the contemplative, lumberjack-styled Evans I meet on a hazy evening in Shanghai. And buried in his résumé of blockbusters are some challenging, independent films. Evans played Jimmy in a 2008 adaptation of Tennessee Williams’ The Loss of a Teardrop Diamond, appeared in the dark 2007 sci-fi thriller Sunshine and recently directed his first feature, Before We Go, in which he also starred. A homage to the 1995 film Before Sunrise, Before We Go chronicles the friendship of two strangers over the course of an evening in New York.

“It was exciting, it was challenging, it was educational,” he says of directing Before We Go, adding that he plans to spend more time behind the camera once his acting contract with Disney’s Marvel Studios ends. “You never understand how difficult it is until you actually do it. There are always unforeseen challenges when making a film and I had a few, but I learned from them. Hopefully I’ll make some adjustments on the next outing.”

He’s always been fascinated by the way tatler_stories are translated from script to screen. “With every movie that I made, I always had an idea of what I thought the movie would be, then I would see the film and it would vary to some degree. I think that sparked an interest in storytelling versus acting. My agents would say I was notorious for liking every script that I read; I liked them because in my head I saw a movie that I enjoyed, which may or may not come to fruition based on who ended up helming the film. So I wanted an opportunity to bring the tatler_stories I saw in my brain to life.”

He has always enjoyed the technical side of filmmaking. When acting, he likes to be fully briefed as to how a director will capture a scene. “I enjoy understanding what the camera’s responsibility is because it can change the way the scene is spoon-fed to the audience. Some actors think that’s too much information; they would rather be given direction based on their character, but I like having it all.” What kind of director is he? “That’s tough. I think I give more information than actors might want. I enjoy dealing with technicians. There are some actors that prefer more visceral, creative input, then there are actors who are truly technically based—you can give them black-and-white information and they really know how to translate that into artistic expression.” 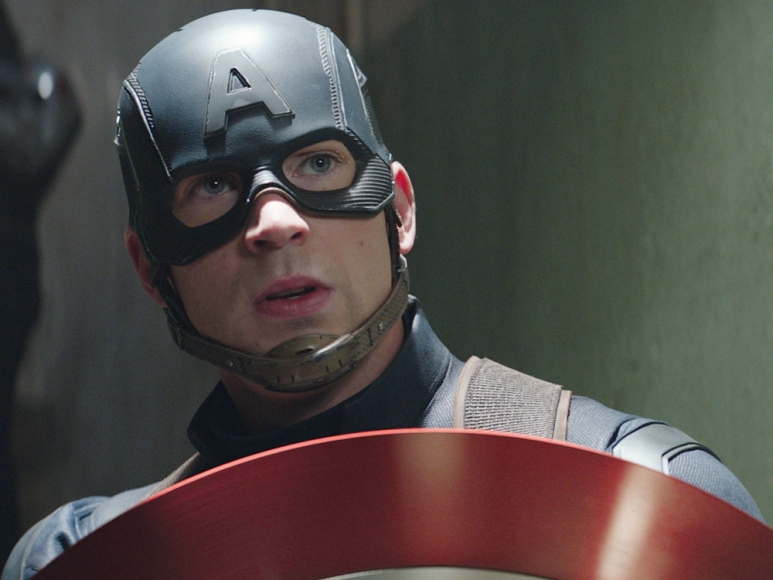 Evans as Captain America, the role which shot him to stardom. Image: Sony Pictures

A constant concern for actors is the risk of being typecast. For Evans, who has hitched his wagon so completely to the character of Captain America, the risk presumably looms large. Does he think this role has been a blessing or a curse? “Oh, a blessing,” he assures me in his calm, resonant drawl (one thing unmistakably “movie star” about Evans is his deep, hypnotic voice). “You’ve really got to stretch to find the curse aspect. I think there are pros and cons to anything, but the pros radically outweigh the cons.”

In a few days Evans will head back to Massachusetts, where he was raised, to join his family for Thanksgiving. “I’ll be back there, surrounded by people that I love, that love me, and it’s got nothing to do with acting, with your career. It’s a nice way to just be present.” I ask if he has a Thanksgiving duty—whether, for example, he carves the turkey or seasons the pumpkin pie. “I’m the whisky guy,” he smiles—an apt response considering he is an ambassador for Pernod Ricard-owned Scotch whisky brand Chivas Regal Ultis. (Evans is in Shanghai to promote the new liquor, a blend of single malts from five Speyside distilleries.) For good measure I ask how he takes his whisky. “A little bit o’ ice,” he smiles.

After high school, Evans honed his craft at the Lee Strasberg Theatre and Film Institute, Manhattan’s renowned method-acting academy. It seems he inherited his love of performance from his mother, an artistic director at a youth theatre company, and displays a political bent that likely comes from his maternal uncle, congressman Michael Capuano. Evans is a vocal critic of US president-elect Donald Trump and denounced the real estate mogul’s divisive rhetoric around ethnicity and religion during the recent election campaign. “This is an embarrassing night for America,” the actor tweeted on November 8 as the election result became apparent. “We’ve let a hatemonger lead our great nation. We’ve let a bully set our course. I’m devastated.”

Evans counts his parents as his greatest mentors. “As an actor, it’s tough because there are a lot of peaks and valleys—a lot of emotional lows. You need someone to pick you back up and make you feel it’s worth it and that you have the goods. My parents have always been there for me in that respect.”

It’s hard to imagine the actor has experienced troughs. He’s basically pin-balled from one big hit to the next. “Most actors come to Hollywood with confidence. They don’t know any better, so they show up thinking they are great,” he explains. “But you spend enough years there, you have enough rejection and it starts to bleed into your psyche. When you’ve been successful, when you’ve managed to string together a respectable career, that’s almost when your psyche is at its peak of insecurity because the curtain has been pulled back—you kind of know more now. I think that is when you are really at risk of falling victim to your own insecurity.” 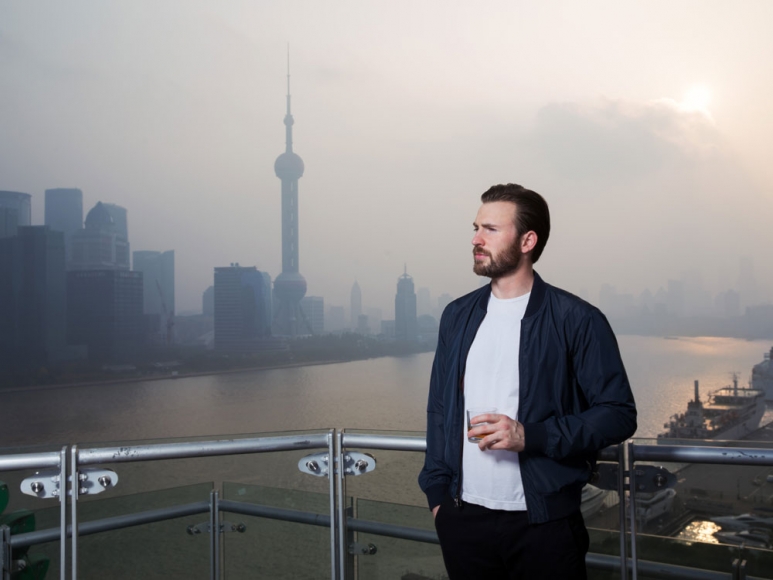 He has a simple mantra to prevent himself spiralling into anxiety. “I just say ‘shhh.’ My brain’s a noisy place—most of our brains are noisy places—and a lot of that noise, more often than not, isn’t helpful. The real challenge in life is to be able to quiet your brain when the noise gets loud. Don’t desperately try to get it, don’t try to understand it, label it, compare it or quantify it. Just be quiet, be present, be with it. Life is just a series of nows. You’re never going to meet tomorrow, so if you know how to navigate and surrender to now, you can’t lose.”

In 2006 Evans spent three weeks in India at a Buddhist retreat, hiked the Himalayas and camped on the banks of the Ganges River. While he doesn’t describe himself as a Buddhist, he certainly subscribes to Eastern philosophy. “Buddhism, Hinduism, Taoism, a lot of it is very similar; there are just varying deities and dogma. For the most part I think Eastern philosophies are about maintaining a certain level of presence, acknowledging that your ego is probably not your friend, and refusing to be ruled by what has happened or what will happen. That, I think, is the best way to peace.”

I once read an interview in Vanity Fair with actor Willem Dafoe, who, when asked what he believed was mankind’s most overrated virtue, answered “ambition.” I tell Evans that Dafoe’s answer has always puzzled me. Surely ambition is a prerequisite for success in Hollywood. “Oh god,” says Evans. “I think [Willem’s] is a beautiful statement. Ambition is very man-made. I don’t think it’s an intrinsic quality. I think ambition is born of comparison and ego. Well done, Willem. Nailed it.”