Sean Lee-Davies’ "Love is Wild" Returns to Captivate Once More

Sean Lee-Davies — TV host,  activist and Hong Kong Tatler's October cover star — has brought Love Is Wild back for its third showing in Hong Kong before it departs on a global tour. The fine-art photography series serves as a platform in which Lee-Davies reimagines humans as guardians of the planet, rather than its ultimate consumer, through striking portraiture featuring some of our city's most famous faces. A joint product of  Project C:Change and Awethentic Studio (both brainchildren of Lee-Davies himself), the series marks another milestone in Lee-Davies' endeavours — the inaugural exhibition and launch of Awethentic Gallery, the first art and virtual reality (VR) concept space pop-up in Hong Kong.

Awethentic Gallery has set up shop in Central Building and will be there until the end of February, providing a host of immersive art and virtual reality experiences for the public to enjoy an elevated appreciation of their potential. The Love Is Wild exhibition, too, has evolved this time around, featuring a number of fresh innovations—namely,  the unveiling of Love Is Wild VR, a 360/VR film directed by Lee-Davies and producted by Awethentic Studio about marine conservation in the Solomon Islands. 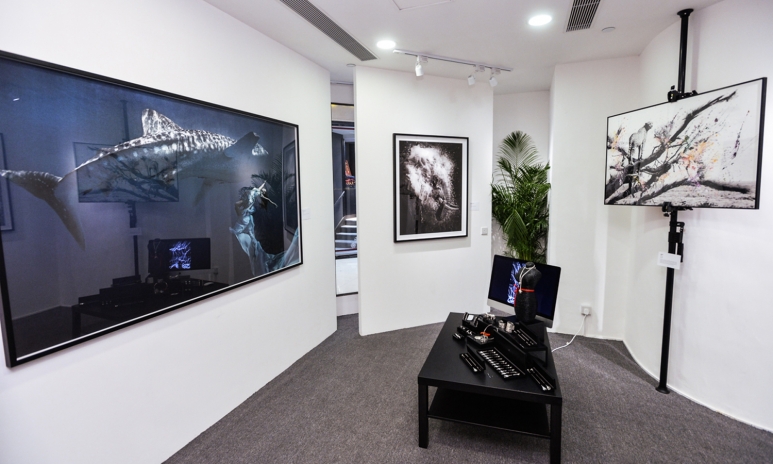 To celebrate the release of Love Is Wild VR, Lee-Davies also collaborated with local designer and artist Queenie Rosita Law on a unique hybrid painted print. Lee-Davies has worked with many other artists though the Love Is Wild project with Project C:Change and Awethentic Studio. Early this year, Project C:Change curated the first annual "Love Is Wild: Walls of Change" campaign, bringing together a number of pre-eminent street artists to spread the message of hope for wildlife and raise awareness about illegal wildlife trade in the public spaces of Hong Kong.

There's no doubt that art has the power to convey ideas and change perception, and Lee-Davies is using this in his conservation efforts to great effect. Factor in his notability along with his creative vision, saving wildlife and promoting conservation has never looked so good.