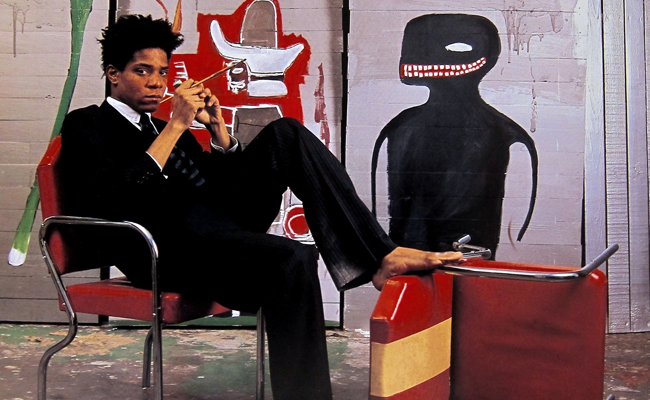 Born in Brooklyn, New York and having left his family home at the age of fifteen, Jean-Michel Basquiat took to the streets, quickly becoming a denizen of the explosive underground scene. He became a street poet and noise musician working under the name Samo. In 1981, he left his alter ego behind and began painting and drawing. He sold his first pairing that year and by 1982 his work was in great demand because of the Neo-Expressionist art boom of the time.

Despite his charismatic, dreadlocked image, Basquiat fused drawing and painting with history and poetry to produce an artistic language and content all his own. His paintings, to this day, maintain a powerful tension between opposing aesthetic forces and provide a commentary on the realities of race, culture and society.

Basquiat has a charged shorthand approach to his paintings that still have many admiring his pieces even after his untimely fame and addiction fueled death in 1988. He is famed for saying, “I don’t think about art while I work. I try to think about life”. And it is life that he has successfully portrayed in his raw and emotive images that will adorn the walls of the Gagosian Gallery in Central later this month.

The same exhibition showing in our illustrious city also had tens of thousands of people step through the doors of the Gagosian New York earlier this year. With such an emotive story to tell and such beautiful words to share, Jean-Michel Basquiat is definitely one to have on your calendar for Art Basel month.