PhilippineTatler.com gets an exclusive look at the amazing sculptures of Daniel Dela Cruz for Art Fair Philippines 2016

From his amazing debut in 2007, Daniel dela Cruz has consistently brought awe and amazement in the arts with his fascinating sculptures. This year, he presents his latest masterpieces at the 2016 Art Fair Philippines with “HIS ONLY SON;” a series of metallic sculptures depicting iconic religious concepts captivating its audience, not by evoking the senses of a devout, but rather through empathy. Each piece speaks to its viewer as if it were a soliloquy narrating their journey. Noted art critic, Cid Reyes shares, “The central figure in ‘His Only Son’ comes as a shock, for Christ is depicted as a Child already crowned with thorns, as indeed his destiny had been foretold in the Old Testament. What is wondrous is that de la Cruz has conceived the figural forms by turns from a universal and a Philippine viewpoint, with such incorporations of native touches, suggestive of sights at the Quiapo and Baclaran churches, brimming with their local auras, energies, values, and of course, contrarian characters.”

PhilippineTatler.com got an exclusive interview with the artist to share with us his story and inspiration for this collection:

Philippine Tatler: What was your inspiration for your work “HIS ONLY SON”?

Daniel dela Cruz: As you will read below in my second answer, the path to becoming a visual artist was something that took quite some time for me to realize. It was a dream fulfilled; the success and fulfillment of which I always attributed to God. It was then that I said a prayer that my art be for His glory, and that my art become a means for me to give back to the world. It has been 9 years since my first exhibit and this is the year I felt I should openly proclaim my love and gratitude to our Lord. “His Only Son” is my humble way to give thanks for all the blessings. I have never been very open about my religious beliefs and always felt it to be a private matter, so this show and proclamation of my faith in public is quite a new experience. The title and inspiration for this exhibit was taken from the bible passage John 3:16 “For God so loved the world that he gave his one and only Son, that whoever believes in him shall not perish but have eternal life.” PT: Did you always want to be an artist? Tell us a little bit about your journey.

DC: I actually have always been sculpting since I was a child. From the moment I picked up a piece of clay, I have been in love with creating forms and figures from my imagination. At an early age I was taught by my dad to make my own toys, from bamboo puppets to wooden tops, and whatever else came to mind; working with my hands just came naturally. In fact, my first job immediately after college was as a sculptor for Christmas ornaments in a local handicraft export company. This led to a very long career in product development and design of which I am still actively involved with. As an industrial designer, I was able to work with many companies here and abroad and learned to work with a multitude of materials from paper to shells, resin, metal to ceramics and many more.

The turning point in my life that led me to pursue a career in the arts was when I turned the age of 39 and was wondering what next? I have achieved quite decent success in this field (having been able to work with large companies abroad selling products under my name as a brand and even up to designing for the prestigious Villeroy & Boch company in Germany), and I was searching for a new challenge. It, then, occurred to me that I should give my age-old dream of being a bona fide artist a shot. A dream, which I could not get into earlier for financial considerations, required that I pursue a more stable source of income.

With the experience I gained working with all materials, I set out to tackle the visual arts field using metal as my chosen medium. I started working on my first art sculpture with the aim of really doing something for myself and not for a particular market (which was always the basis for design in my field). This very first piece “Kandungan,” which was a mother morphed into the form of a chair, I showed to National Artist Arturo Luz to seek his opinion and advice as to whether it was good enough to form a basis to pursue an exhibit. Luck was with me that day and he gave me the encouragement to go ahead. His best friend and our family friend Architect Lor Calma, then, proceeded to give me advice on how to go about setting up my first exhibit, and even helped get to exhibit at the Artist Space in Ayala Museum. So on the year I turned 40, I had my first exhibit entitled “Himig.” Needless to say, my debt of gratitude to these two people in helping me break into the visual arts field is immense. Support of friends and family, of course, was significant. One more person I need to mention and thank as well is the late Professor Sonia P. Ner. I met her through a friend and invited her to be a Guest of Honor in my third exhibit at the Ayala Museum entitled “Himig” held in September of 2008. We became quite close friends from then on, and, in the following years until she passed, she always served as my advisor and confidant in negotiating the art industry. I am now nearing my 10th year in this field, and it has been one of the most remarkable and fulfilling journeys in my life! 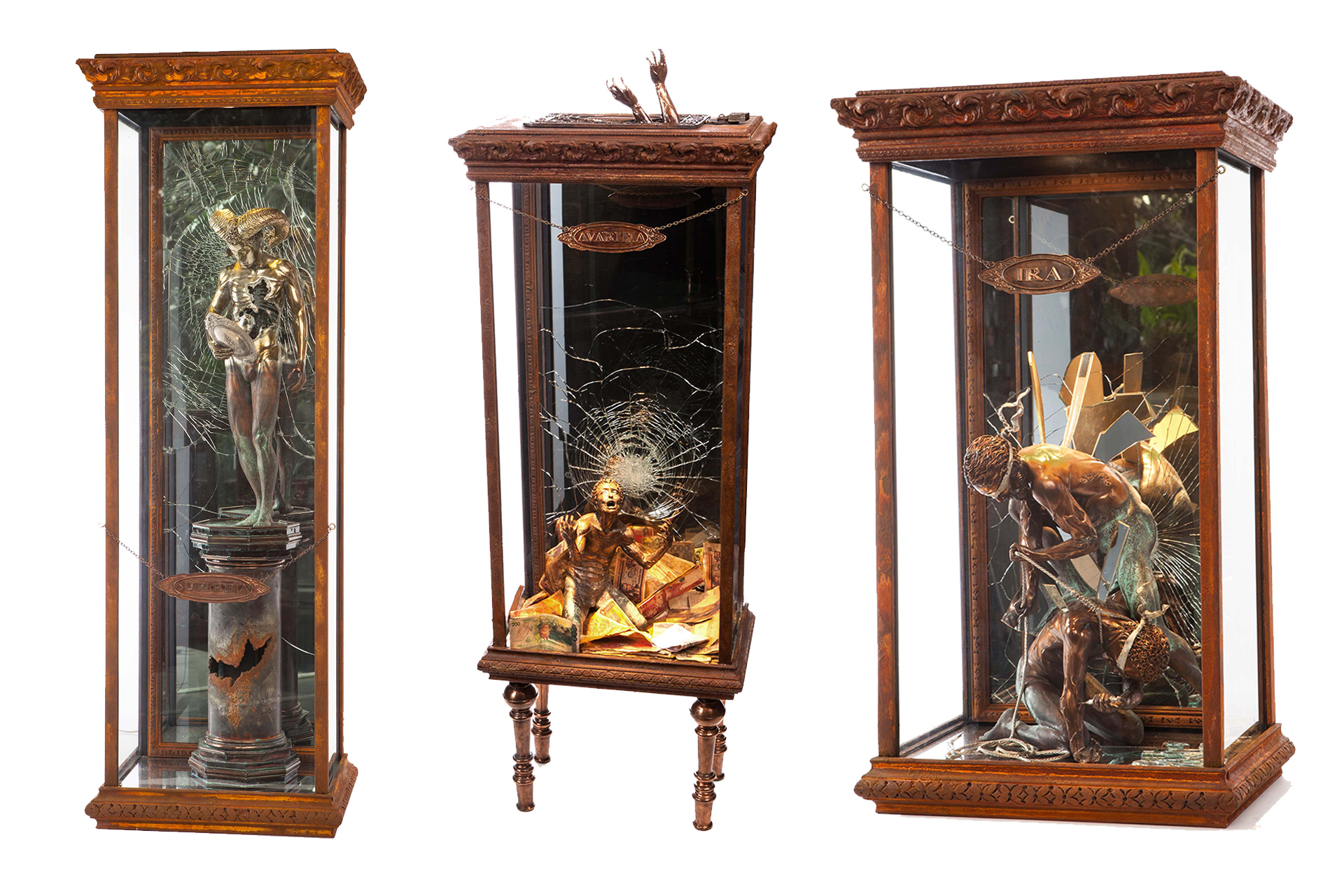 PT: The theme of spirituality is often sensitive with Filipinos. What is the message you want to impart through your art?

DC: “His Only Son,” as an exhibit, is a simple declaration of my personal faith and belief in Jesus and God. It is not, in any way, intended to be preaching but simply a way for me to remind people of the sacrifice that Jesus endured for our sins out of His love for us.

If one would study all the works in this collection, one would notice that there is only one work where I represented Christ; all the rest of the works are mainly of regular people. Around Christ are vignettes of people from those who are Holy, to those who are sick and suffering and even to thieves, deceivers, and sinners. If there is a message I want to impart here, it would simply be to say that all of us, whoever we may be, or whatever we may be doing have been given equal chance of redemption and salvation through the sacrifice of our Lord Jesus. He did not come to the world to judge and condemn; He came and sacrificed himself to offer us eternal life.

PT: Who or what has had the most profound influence in your artistic style?

DC: Even before I came into visual arts as a practitioner, I was always in love with art. Early in my married life, my wife Monica and I began collecting paintings, small works here and there, buying what we could afford and what we liked, and, up to this day, I am an avid admirer of the work of my fellow Filipino artists. So, I see the visual arts field from both perspectives of an artist and a collector. The growth and resurgence of Filipino art with amazing exhibitions such as this ongoing Art Fair Philippines 2016, and even the growth of art recognition internationally with art shows and fairs constantly popping up all over the world is a constant source of inspiration! This serves as a huge influence to my art in terms of aspiration, and as a constant challenge to do better. I believe that art and my artistic style should be in constant development and evolution. I feel that even though an artist has reached significant success with his current style and approach, one should constantly push the envelope, dare to try new and different things, and take risks rather than to stay within a certain comfort zone.

PT: Who do you produce these works for? Is there an ideal Daniel dela Cruz buyer?

DC: It was a slow process for me to grow and shift from an industrial designer’s mindset to that of a visual artist. It is the industrial designer’s job to produce something beautiful, but something that is also functional and geared towards a certain market or buyer. In visual arts, the aim is to create not just beautiful objects but also objects that touch people on a personal level. It has been nine years since I entered this new field, and I definitely am no expert on it, but I feel that this field the work is of a personal nature. The artist should work in terms of self-expression rather than working with a particular market or buyer in mind. So for me, the ideal “Daniel dela Cruz” buyer is someone who sees that message I am trying to say or appreciates that self-expression I have put onto the work, and is either touched by it, inspired, or, even, simply feels a certain connection to the work. There has been so much talk about people buying art for speculation and as an investment; the ideal “Daniel dela Cruz” collector for me is the buyer who buys art not as a financial investment but as an investment for the soul.